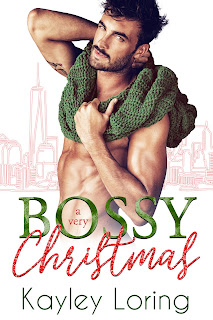 Note: An advanced reader copy (ARC) was provided by the author via Wildfire Marketing Solutions.
Oh, Kayley Loring, you do my heart good! You know how you're having a rather dreary day--week, no wait, month, hold on, let's make that plural: MONTHS--and you're counting what's left of the year, hoping 2021 would get here sooner with fingers crossed that it'll be a better year than this year (which is the same thing you did last year, but hey, things were rather good January to mid-March, so...), and you wish some bit of sunshine would come along? Well, that's precisely what A Very Bossy Christmas did for me, and it came along at just the right time. Who says a bit of Christmas can't come early? After all, the holiday season kicks off over here once September first rolls in, so bring it on, Christmas!
A Very Bossy Christmas is an office romance, what with the main characters working together and all, but quite a bit of it also takes place away from the office setting. Thirty-two-year-old Declan Sullivan Cannavale is a successful corporate lawyer in Manhattan who had a penchant for going through personal assistants more often than people change underwear (and if you don't do THAT regularly...ewww!). That is, until Maddie Cooper took charge of his office. The twenty-eight-year-old is more than adept at her job, showing no fear in putting Declan in his place as needed--which is rather often. When she requests time off on Christmas, he relents but on one condition: that she agrees to be his fake girlfriend for what are sure to be three awkward family gatherings over the holidays. Is this unprofessional? Totally, but then maybe it's time to get up close and VERY personal...
I smiled and I snickered and I snort-laughed. Now, there's a trifecta that any romantic comedy reader wouldn't say "no" to. To top it all, I sighed happily by the end because Kayley Loring knows how to neatly balance heart, heat, humor, AND the holidays (alliterations, anyone?). Declan and Maddie were a joy to get to know and their story was,  indeed, rom-com gold, but it also had a smidgen of angst to it, especially once Loring dove deeper into why Declan didn't want to go home for the holidays and the complications of the boss and the assistant becoming romantically involved while still working together. I enjoyed every minute I spent with Declan and Maddie, and the bonus here is that A Very Bossy Christmas is the first in a brand-new untitled series. Five stars!
Date Read: 28 October 2020
Learn more about Kayley Loring.
Purchase A Very Bossy Christmas on Amazon.