Review: I Promise You by Ilsa Madden-Mills (The Hook-Up #4) 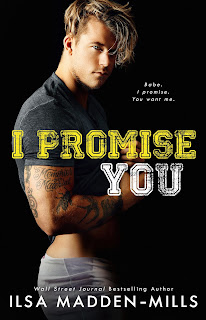 "We need a new kiss to replace it. I'm going to call in that promise you owe me, Serena."

My eyes dart to his mouth as nerves fly at me. Just do it, Serena! "Then take it."

Ilsa Madden-Mills takes readers back to Waylon University and re-introduces fans of the Hook-Up series to Dillon McQueen, who has been a familiar supporting character. Now, if you're new to the series or the author, then fret no more! You can totally jump into this fourth book without having to read the first three--but do yourselves a favor and read them anyway, especially if you happen to love college romances with a sports theme to them. Each Hook-Up novel is a standalone, with the interconnection coming in the form of the male characters being players on the Waylon University Tigers football team. Other than that, each book has different couples and stories that end with happily-ever-afters.
I Promise You finds twenty-one-year-old college senior and football player Dillon McQueen with the weight of responsibility on his shoulders. Not only is he the team's star quarterback, but he also happens to be the team captain. His teammates look to him to lead and set an example for the rest of them. It's his last year and not only does he want to bring the championship back to Waylon U, he also needs to make the best possible impression that will get him drafted to the National Football League post-graduation. The last thing he needs is a distraction, but when it comes in the form of twenty-four-year-old Serena Jensen, he can't seem to help himself. Maybe it's fate; after all, legend has it that the first girl a freshman kisses during the bonfire will be the one he'll never forget. And Serena? Well, she was that girl three years ago. The problem? She doesn't remember him.
Dillon and Serena had the sort of first kiss that you'd think was memorable enough for both of them to have never forgotten a single detail about that moment. Here's the thing: memories are a trick thing, and recalling every single second of a certain moment isn't exactly as commonplace as countless romances would have us believe. And that's what I appreciated about this book. There wasn't this immediate recognition, which felt so much more realistic, and it set up the rest of the story quite nicely. I loved getting to know these two main characters, and while there were a lot of lighthearted and witty encounters and exchanges, there was also quite a bit of angst, which made my heart go out to both Dillon and Serena. They may have had different personal histories and came off as opposites, but they fit each other in a way that no one else would've made sense for either of them. I swear, Ilsa Madden-Mills's I Promise You is a wonderfully written five-plus-starred read.
-------------------------

Read my reviews for the Hook-Up series: