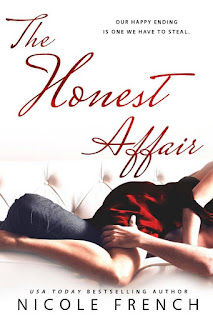 Note: An advanced reader copy (ARC) was provided by the author via Wildfire Marketing Solutions.
Now, this is how you wrap up a series, especially that I've become quite emotionally attached to and invested in! Nicole French delivers the third and final full-length novel, but fourth book release in her Rose Gold series, and it's every bit as exceptional as I hoped it would be. Because The Honest Affair is the conclusion to a series that has a continuing story line, you need to read the books in order--The Scarlet Night, The Other Man, The Perfect Woman, and The Honest Affair--so as to understand everything that is happening and have the most optimum reading experience and appreciation for the story and characters. So, if you've been waiting to binge on these books, now's the time!
This picks up where the second one left off. Matthew Zola is caught between the job he was sworn to do and the woman who solely owns his heart and soul. His love for Nina de Vries has been complicated from the get-go, an affair that was fated to become more from the very beginning their paths crossed. She's shackled to a husband she longs to be free from and ties to a powerful family. He was the one who was supposed to be her prince in shining armor--the one who would rescue her--but he's no prince and by the end, everything about him could be tarnished, but for Nina, Zola is set to put it all on the line.
Talk about being on the edge of my seat for most of this book! Goodness, but how worried I was for these two. Zola and Nina were up against seemingly insurmountable odds, and while it may sound cheesy, love--their kind of true, passionate, all-consuming love--can be one heck of a motivating factor. From the moment these main characters got together in the prequel novella till the the conclusion to their epic love story, Nicole Franch held my sole attention and all things Rose Gold had my affection. Five stars for The Honest Affair.
-------------------------

Read my reviews for the Rose Gold series:

The Other Man (book one) - five stars - My Review