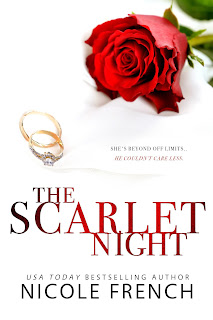 Nicole French launches her new Rose Gold series with a prequel novella that both intrigues and entices! The Scarlet Night introduces readers to Matthew Zola and Nina Astor. He works in Brooklyn District Attorney's office, and is currently working an important but complicated case. With his job often taking the top spot on his list of priorities, his sisters have now gotten into the habit of razzing him about his lack of a personal life. That doesn't mean that he's wanting for female companionship. If anything, it's the kind of women he often chooses to be with that's the problem--the ones that should be off-limits...the ones he should be staying far away from. And then he meets Nina Astor at his best friend's bar, and there's something about this beautiful woman that calls to him. There's an air to her that makes him believe she's nothing like the other women he's been with. They share one night together, but it's enough for him to know he wants more. It's also enough for him to know he shouldn't pursue her, but then Matthew has never been one to heed warnings, even if it's the sort that his own gut tells him.

Matthew Zola should be a familiar character for those who have read the author's two previous series. He was introduced in the Spitfire books--Legally Mine, Legally Yours, and Legally Ours--and he returns in the spin-off, Quicksilver--The Hate Vow, The Kiss Plot, and The Love Trap--which is the same trilogy that Nina Astor was part of. I've only read the Quicksilver books, but now I find myself itching to read the Spitfire novels because I need to see where Matthew (yeah, I don't like calling him Zola) first came into the consciousness of Nicole French's readers and fans. Setting aside the newest inclusion to my to-be-read list, you can pretty much go into this prequel novella not having read the other series and still appreciate the connection between the main characters, and goodness me, but what a connection it is! The Scarlet Night may have been short, but it was more than enough to pique my interest for everything else to come. Suffice it to say that I'm going to need more of Matthew and Nina and find out what tangled web French is going to weave for them and how these two will make their way out of it all. Five stars! ♥