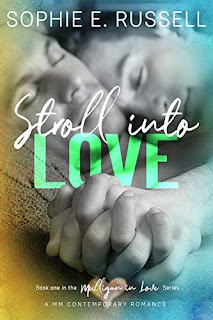 Note: An advanced reader copy (ARC) was provided by the author via Gay Romance Reviews ARC Team.
Twenty-twenty has been a rather, erm, shitatistic year, to put it mildly. But if there's one thing that this year has reminded me, it's to pay attention to the good and not to solely focus on the bad, because yes, there has been some good. One just happens to be truly notable debut authors that have captured my attention with their stories. On that list is Sophie E. Russell, and her first novel, Stroll into Love, also opens her first series, Mulligan in Love. This debut and series starter impressed me with the author's beautiful and lyrical storytelling and memorable cast who called the small town of Mulligan, Massachusetts home, particularly the lovely employees and patrons of Cafe Lane and The Fuzzy Peach.
When thirty-two-year-old Sebastien Bouchard moves from Boston to Mulligan, he left behind a husband, the home they shared, and his career as a private lawyer. While two of his closest friends remained his only ties to the city, Seb has made a new life for himself and his beloved six-year-old daughter, Aimee, and their cat, Gigi. Being a wood craftsman allows him to do something he loves while spending his free time with the person he loves most. His best friend, however, thinks it's time for Seb to move forward and make new connections in his new hometown. He's promised to go to the local LGBTQ+ bar in town every Thursday, and it's there where he spies a man with sad eyes and theirs is a wholly unique sort of connection, but Seb fears all he can offer is a platonic relationship.
Thirty-year-old cafe owner Schuyler Ross is keeping a promise of his own. Keeping the sadness at bay isn't getting any easier as time goes by. The knowledge that nothing lasts forever--that those who mean the most leave, whether you or they like it or not has stayed with him, and the most recent reminder has left him bereft. When he notices the hot man with long hair at The Fuzzy Peach, he isn't quite sure why the man he soon considers as his lumberjack affects him the way he does. When he risks approaching him, Sebastien Bouchard makes it clear that all he can offer is friendship, something the Sky readily agrees to. These two will have to climb over walls and break down fortified protections around one another's broken hearts because theirs is no easy stroll into love.
This was a really fantastic slow-burn romance, one that had the angst that I crave but still with enough lighthearted moments so as not to make it feel overly heavy or depressing. Seb and Sky were such strong main characters, with distinct personalities and back stories that made them equally interesting. Then there was Aimee, who was an adorably precocious scene-stealer, and the entertaining cast of characters, most of whom were residents of Mulligan, although I wouldn't be surprised if those who weren't would be moving there as the series moves forward. And that's what makes this series starter such a winner for me--I loved that Sophie E. Russell made me fall for the story she created for Seb and Sky while also stoking my curiosity about supporting characters who I wanted to read more about in future books. Consider me an early fan! 4.5 stars for Stroll into Love.
Date Read: 30 October 2020
Learn more about Sophie E. Russell.
Purchase Stroll into Love on Amazon.