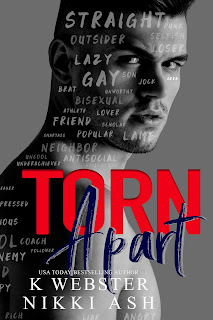 Note: An advanced reader copy (ARC) was provided by the authors via Wildfire Marketing Solutions.
Oh my... I thought I knew what I was getting into when I started reading this first in a brand-new duet from the writing duo of K Webster and Nikki Ash, but nothing could have prepared me for what lay waiting for me between the proverbial covers! Whatever expectations I had were nothing compared to the story told in Torn Apart, the first in the Torn and Bound duology. Featuring for main characters, each of whom takes their turn in telling their story via first-person viewpoints, this isn't the sort of story that's easily categorized under the romance genre umbrella. Just like Ashton Carter, who pretty much serves as the top main character, this isn't a case of one label fits all, and deservedly so.
Twenty-one-year-old Ashton Carter is in his final year of college, but that doesn't mean he plans on easing up with as far as wreaking havoc is concerned. He is the bane of the dean's existence, and it just so happens that the dean is also his father. Ashton represents everything daddy dearest has disdain for, and Ashton makes no apologies for who he is. His father has never agreed with his life choices, and he certainly won't begin now, not when Ashton, who has always identified as gay, falls for his best friend, Mia Lexington. He follows that up with dirty thoughts of his archnemesis, Brayden Murphy, and lustful fantasies of his roommate slash Atlantic Pointe University's new hockey coach, Andrew Thompson. Things are bound to get complicated--more than Ashton considered possible.
Fair warning: This book ends in a cliffhanger, so if you're the type that doesn't like to be kept waiting in between books, then you may want to hold off till book two release in mid-November. That being said, boy, oh boy, this is not your typical new adult (NA) romance. There are several tropes in play, yet it never gets overwhelming. Ashton is, indeed, at the heart of this book, or at least that's how he came off to me. He's the driving force and his actions are what push certain things into play. However, there's no denying that Mia, Brayden, and Drew demand your attention just as much, and all four of them form this quartet that you won't be forgetting anytime soon. The only thing Torn Apart will leave you feeling torn over is whether you should read it now (you should!) or wait until the release of Bound Together next month (good luck with that!). This gets five stars.
Release Date: 20 October 2020
Date Read: 20 October 2020
Learn more about K Webster and Nikki Ash.
Purchase Torn Apart on Amazon | Apple Books | B&N | Kobo.