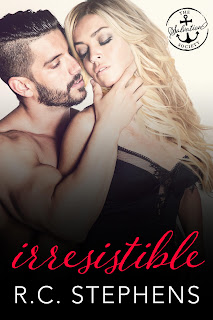 Note: An advanced reader copy (ARC) was provided by the publisher via Candi Kane PR.
Irresistible is part of the second batch of releases in the Salvation Society collection which is inspired by Corinne Michaels's Salvation book universe. Penned by R.C. Stephens, readers are introduced to Avery Montgomery and Bennett Sheridan. He's a thirty-seven-year-old SEAL who is waylaid by injuries that have pretty much ended his career in the navy. He's in a great deal of pain and understandably angry and bitter with his current circumstances, drowning in despair and hopelessness. And then Avery enters his hospital room. The thirty-three-year-old is undeniably beautiful but this physical therapist soothes something inside him. Avery hasn't had the time nor the inclination to pursue a personal relationship with any man even fourteen years after she lost her husband. Her world is all about their sixteen-year-old daughter, Jessy, and her patients. So, what's so special about the wounded SEAL who's now under her care that makes him so darn irresistible?
I've enjoyed the books in the Salvation Society series that I've read so far, and that includes R.C. Stephens's contribution to it. Bennett and Avery's story is one with a fair amount of angst, but it's also got some notable lighthearted moments. These two were at a crossroads of sorts in their respective lives, and it seemed like fate intervened when those very crossroads intersected with each other. There's a twist that I had an inkling about, but that was due in large part to my being suspicious and paranoid by nature, and I think it played well in the tale and wasn't drawn out. I'm giving four stars to Irresistible.
Date Read: 07 October 2020
Learn more about R.C. Stephens.
Purchase Irresistible on Amazon.