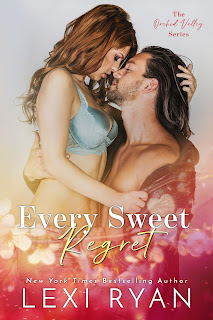 Note: An advanced reader copy (ARC) was provided by the author via Valentine PR.
Okay, so the Orchid Valley series may not have gotten off to the greatest of starts, at least as far as I was concerned. But this is Lexi Ryan we're talking about here, and I know how gifted an author she is, so it was highly possible that it was a case of me simply not clicking with the story and characters. However, I knew that I was going to stick it out with the series because, again, this author has shown me time and again that she's good at what she does. Thank goodness I stuck it out because book two turned out to be better.
Every Sweet Regret is the second book in the Orchid Valley series, and it's got the falling-for-your-sibling's-best-friend feel to it. Throw in some opposites attract and single parent tropes, and this had me intrigued. Stella Jacob has had a crush on Kace Matthews for years, and it's not necessarily a secret either. However, he's never made a move on her. It used to be because she's his best friend's sister; now, he's too busy being a single father and with work. Maybe chatting it up with someone on a dating app is a better move for him. What happens when he learns that his online girl and Stella are one and the same?
As a whole, this was an enjoyable read. I appreciated seeing Stella come into her own and Kace finally move forward from the end of his marriage. There was quite a bit of take-two-steps-forward-and-then-take-one back going on, but then it was understandable considering they had their respective sets of issues that they had to deal with. She was the girl who lived life like it was a party, and he was the guy who took responsibility seriously--or at least that's how they were seen by other people, even each other. There was more to them than meets the eye, and I liked getting to peel back those layers as their relationship evolved. Every Sweet Regret was a good four-star bounce back for the series.
-------------------------
Read my reviews for the Orchid Valley series: