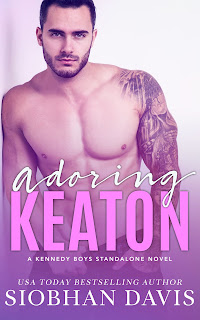 Note: An advanced reader copy (ARC) was provided by the author via Wildfire Marketing Solutions.
It's been a little over a year since I last read something of Siobhan Davis's, and it was a co-written release at that. Admittedly, my experiences with the few books I've read of hers haven't been noteworthy in a positive sense as I wish they'd been, but when I heard about Adoring Keaton, I decided I'd give her writing another shot. After all, I do love my M/M romances, so I made an exception to my usual rule about reading books in a series in order for this one, which I wish I hadn't because I did feel a wee bit lost at times, particularly with as many recurring characters as there were in the Kennedy Boys series.
Adoring Keaton is the ninth (yes, the NINTH!) book in the Kennedy Boys series, and it's the first one that features an M/M story line. Keaton Kennedy is part of the seven Kennedy brothers AND part of a set of triplets, with the first three books in the series focused on one brother, and everything that follows featuring one brother per book (although I'm not entirely sure about one book since it doesn't have a "K" name in the title, but this is what happens when I don't read books in order). This employs the friends-to-lovers trope with bits of angst and humor springkled throughout. Keaton is paired with Austen Hayes, his roommate and close friend, who may not be truly as straight as Keaton assumes he is.
There's quite a bit that goes on in the story, and jumping into this series not having read the first eight books is a reminder of why I have the whole reading-books-in-a-series-in-order rule to begin with. However, the author did an admirable job trying to provide enough information so as to get new readers up to speed on all things Kennedy. As for the romance itself, I did enjoy getting to know both Keaton and Austen and seeing how they overcame their struggles and issues as two people who were more recognizable than the average college student and as a fledgling couple keeping their sexuality under wraps. All things considered, Adoring Keaton was an engaging and entertaining four-starred novel.
Date Read: 21 October 2020
Learn more about Siobhan Davis.
Purchase Adoring Keaton on Amazon.