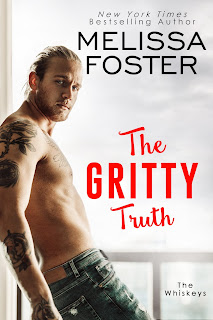 Note: An advanced reader copy (ARC) was provided by the author.
Three books in a row, each one belonging to a different series, and they've easily become part of my list of favorite reads from Melissa Foster. The first one was A Little Bit Wicked (The Wickeds: Dark Knights at Bayside #1) and the second was Tempted by Love (The Steeles of Silver Island #1), both series starters for spin-offs. The third book is The Gritty Truth, which happens to be the ninth title in Foster's The Whiskeys: Dark Nights at Peaceful Harbor series, which was previously titled simply as The Whiskeys prior to the release of the second series featuring the Dark Knights motorcycle club. You can read, enjoy, and understand this novel without reading any of the previous ones in the series.
The Gritty Truth is the story of Quincy Gritt and Veronica Wescott. If you're familiar with this series, then Quincy should be a recognizable character. (Don't worry; if you've never read the series or new to the author, you can safely jump in!) His addictions are no longer getting the better of him, but he also recognizes that being a recovering addict means the struggle is not only real, getting a handle on it is an everyday thing. He feels like he's finally read to pursue Roni and take her on the date he owes her. Roni, however, may need a bit of convincing to the truth that they could have something special. When Quincy's past comes a-calling, though, will they be able to stay strong and stay together?
This book gave my heart a workout, what with it being such an emotional story about love, perseverance, and hope. Quincy and Roni were main characters who know all about hurdles and challenges being put before them. They know what it's like to lose people and things, but these two fought back, pushing against their circumstances to move forward and make better lives for themselves. I appreciated that they were flawed, but neither one was broken. There was angst, but this also had its fair share of lighthearted moments. While there were points in the book where I got teary-eyed, there were a few more which made me smile. The not-so-gritty truth is I loved The Gritty Truth. Five stars!
--------------------------