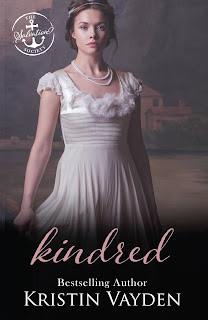 Note: An advanced reader copy (ARC) was provided by the publisher via Candi Kane PR.
Kristin Vayden's contribution to the multi-authored Salvation Society collection offers up a nice change of pace. Kindred is a historical romantic suspense read, taking readers back to the early 19th century, post-Napoleonic Wars. The main characters, Collete Jaxsen and Emerson Marcus, are the ancestors of Jackson Cole (Beloved and Beholden, which make up the Belonging duet and are the first two novels in Corinne Michaels's Salvation book universe). This can be read as a standalone, i.e. you don't necessarily need to read any of the original Salvation books, but I highly recommend them because they're great reads.
Collete Jaxsen is a spy, and she's considered the best one in England. She could be doing so much for the War Office; instead, she's tasked to train Emerson Marcus, the Earl of Burberry. More adept at being a soldier and a keen sniper, Emerson thought he'd seen the last of Napoleon Bonaporte when he was captured and judged guilty, leading him to be exiled on the island of Elba. But rumors abound that those who remain loyal to him are gathering to free the tyrant. Collete needs to ensure that Emerson is more than prepared for this mission, but what neither is ready for are their feelings and to fight against them.
This was a fast-paced and quick read, one that served as a breath of fresh air considering its uniqueness in comparison to its other counterparts in the batches one and two of the Salvation Society collection, both of which have been published. I liked the tension between the main characters as well as that thrum of excitement when it came to the story. I appreciated that Collete was no shy violet; if anything, I thought of her more as an English rose--beautiful but with thorns. The back and forth between her and Emerson was entertaining and the story held my interest throughout. I'm giving Kindred four stars.
Date Read: 09 October 2020
Learn more about Kristin Vayden.
Purchase Kindred on Amazon.