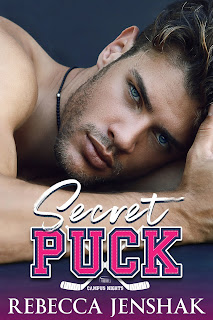 Note: An advanced reader copy (ARC) was provided by the author via Wildfire Marketing Solutions.
Rebecca Jenshak takes fans and readers back to Valley University with the new Campus Nights series, a spin-off of her Smart Jocks series and shifting sports from college basketball to college hockey. Book one deservedly belongs to Heath Payne, younger brother of Nathan Payne from The Fake (Smart Jocks, book four), who is a sophomore and is in his second year of playing for the hockey team. He's got a reputation for never having the same girl in his bed, so what is about the sweet and innocent freshman that's got him hooked? There's no denying that Ginny Scott is beautiful and smart and the kind of girl you'd be proud to introduce to family and friends. But Ginny's just come out of a long-term relationship, and Heath's not known for relationships at all. Keeping things in the friend zone is the right thing to do, especially since she happens to be his team captain's sister. So secret hook-ups would be wrong, no matter how right they may feel.
I enjoyed the heck out of this series starter! There's something about the first book in a series that makes it different from the rest to follow. After all, it sets the tone for whatever else is to come, and it's the book that, when done just right, hooks your interest for the rest of the books. Rebecca Jenshak not only gives readers a great new adult (NA) romance with college sports as its backdrop, but there's bits and pieces about potential future main characters and couples that pique my curiosity, making me want to get to know this cast even better. For their part, Heath and Ginny made me want to cheer them on as they figured out what it was they really wanted from each other and themselves. Jenshak also did a fab job bringing back the couples from the Smart Jocks series as a way of passing on the torch to this younger group. So, a standalone romance, intros to the cast as a whole, and the originals mingling with the newbies is what you get with Secret Puck. Five stars!
Release Date: 19 October 2020
Date Read: 19 October 2020
Learn more about Rebecca Jenshak.
Purchase Secret Puck on Amazon | Apple Books | B&N | Kobo.