Review: The Happy List by Briar Prescott (Better with You #1) 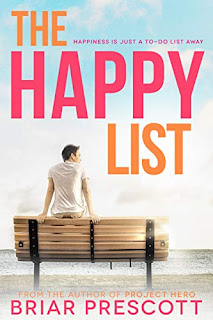 Note: An advanced reader copy (ARC) was provided by the author via Gay Romance Reviews ARC Team.
Where do I begin with my adoration for Briar Prescott's writing? I've read each of the three books this author has published so far, and I've loved every single one. These are stories that stand alone, although this newest one happens to be a series starter (yay!), and while each one shares a different tale, what's noticably consistent is Prescott's ability to pen beautiful and touching romances that have heart and heat and a dash of humor alongside a pinch of angst. Her latest book, The Happy List, had a lighter feel compared to her first two novels, and dare I say that if the rest of the Better with You series is as enticing as this all-new series starter, then I have really got a whole lot to look forward to.
Grayson and Kai have been the best of friends for years, and even with Kai spending the last decade traveling, their close bond remains. When Kai makes the decision to return to their hometown of Boston to plant roots and get his business going, Gray is both thrilled and supportive. He's missed having his best friend close by, and after the not-so-great way his last relationship ended, he's come to certain realizations. So, jotting down what he calls his "happy list" is a great way for him to possibly find some much needed happiness. When Kai finds the list, he's more than happy to assist Gray in checking off every single item...except those last three...or if he's being honest, especially those final three. Maybe.
One of my absolute favorite things about this book was the friendship that Gray and Kai shared. There was a sincerity and genuine care that these two had for each other, even before things became more intimate between them. The romance aspect itself had a slow burn feel to it, and I was all for it, particularly since Briar Prescott kept things at a steady pace, building upon the foundation of a years-long friendship with a secret crush on Kai's end. There were supporting characters that caught my attention, particularly, Gray's older brother, Con, and Con's assistant, Jamie, and I liked Kai's older sister and brother-in-law, Monica and Ivo. All in all, The Happy List was a sweet, lighthearted 4.5-starred read.
Date Read: 29 October 2020
Learn more about Briar Prescott.
Purchase The Happy List on Amazon.