Review: Only One Chance by Natasha Madison (Only One #2) 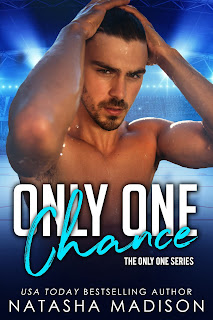 Note: An advanced reader copy (ARC) was provided by the author via Wildfire Marketing Solutions.
Confession time: I was feeling a wee bit iffy with the main characters in the first few chapters. He was a tad too cocky and she was was a smidgen too snarky that I wondered how this hockey player and this sports talk show host would go from kinda-sorta-maybe enemies to lovers with a possibility of more. Welp, I should have known better, because when it comes to her hockey romances, Natasha Madison has yet to disappoint. Miller Adams and Layla Paterson--hockey player and radio show host, respectively--have a fun and flirty beginning that morphs into a four-year chase of sorts. This second Only One novel is anything but what I thought it was going to be, and that's what makes it a winner.
Only One Chance brings the story of Miller Adams and Layla Paterson to the spotlight, and it's probably one of my top three reads from Natasha Madison. Miller and Layla shared a spark of something intangible when they first met for a radio interview, but then she saw him kissing another woman, and that spark fizzled into what Layla considers hate...maybe. Four years on and Miller still pokes and prods, pushing Layla's buttons with his flirty behavior--and not just with her. When she places the winning bid on a date with him during a charity auction, they're both shocked at what's just transpired. She's dodged his advances, but he's champing at the bit to not squander this one chance to be with her.
I. LOVE. THIS. BOOK!!! Gah! I mentioned earlier that I was feeling iffy with Miller and Layla, but the more I got to know these two, the more they endeared themselves to me. The story itself was one that had me absolutely entertained, with it going in a couple of directions that I may not have anticipated but that I nonetheless appreciated. A definite scene-stealer was Grandma Nancy, Layla's grandmother, who made quite an impression on Miller. Cough, cough. It was also nice having Ralph and Candace around, and with that cliffhanger, I'm more than ready for Manning's story (the guy seriously needs an HEA). Oh, and that first epilogue? EPIC!!! Googling FTW! Only One Chance receives five stars.
-------------------------
Read my reviews for the Only One series: