Review: Only One Kiss by Natasha Madison (Only One #1) 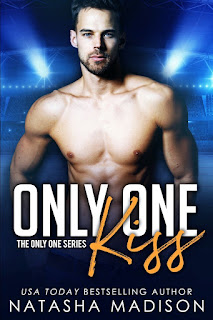 This! This is how you start off a new series! And we're not talking about some regular new series either. Natasha Madison's Only One happens to be a spin-off of her highly popular This Is series, which was a spin-off of her much loved Something So series, so you can imagine how high expectations are for this new series starter. Only One Kiss is the story of Candace Richards, younger sister of Evan Richards and sister-in-law of Zara Richards nee Stone from This Is Crazy (This Is series, book one) and social media specialist par excellance, and Ralph Weber, single father to five-month-old Ariella and one of the Dallas Oilers's star players. He's hoping to be signed to more sponsorships, but in order to do that, he needs a greater social media presence. That's where he needs Candace, the best and most demand social media specialist around. They're mutually attracted to each other, but the death of his girlfriend during childbirth and her rule about not sleeping with clients should be enough to ensure neither of them will cross the line. With a connection as strong as theirs, however, it looks like that's far easier said than done, and all it may take is merely a single kiss...

The Only One series starter turned out to be even more than I could have hoped for! There were a lot of fun and flirty lighthearted moments, but there was this angsty element in the story courtesy of Ralph and the loss of the mother of his daughter, Ari. There are feelings of guilt and anxiety, although I'm going to stop myself here and not go into further detail. Suffice it to say that it's what turns out to be the greatest complication in Candace and Ralph's relationship. These two had to contend with their self-imposed rules and ideas, all of which were formed because of their respective pasts. I loved seeing these two grow and develop as main characters and as the main couple of the book. They became this joint unit with Ari in an organic manner. Nothing felt forced or illogical--just two people who shared a connection that was worth exploring, and part of that connection was how much they loved Ari. Also, with this being a spin-off, there are a number of familiar characters and couples if you've already read the This Is series, and seeing them again was a bonus that I enjoyed. With a start as strong as this, I can't wait to see what Natasha Madison and the rest of the books in the Only One series have in store! Five stars for Only One Kiss.

Purchase Only One Kiss on Amazon | Apple Books | B&N | Kobo.