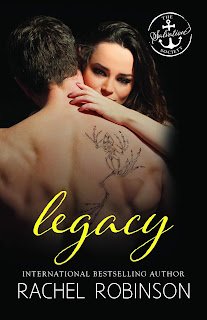 Note: An advanced reader copy (ARC) was provided by the publisher via Candi Kane PR.
I did a quick search of my blog prior to writing this review and realized that I'd read two series starters by Rachel Robinson, one in 2016, the other in 2017. Now, I've reacquainted myself with her writing by way of Legacy, which is part of the Salvation Society's second batch of releases. Inspired by bestselling author Corinne Michaels's Salvation novels, Robinson's contribution to the multi-authored collection also shares ties with her own Crazy Good series. I've read all of Michaels's Salvation books, but have yet to read any of the Crazy Good ones, yet I was still able to fully enjoy Legacy--although now, I'm super curious and have Crazy Good, which is the first book in the series by the same name, on my to-be-read list. If you're new to Robinson's writing, this book is a good place to start at!
Legacy is the story of Aarabelle Dempsey, daughter of Liam and Natalie Dempsey (the Consolation duet by Corinne Michaels), and Luke Hart, son of Maverick and Windsor Hart (Crazy Good by Rachel Robinson). The title says it all; both Aara and Luke have fathers who have proud SEAL legacies, and this younger generation know the importance of upholding said legacies. Aara has always dreamed of becoming the first ever female SEAL, and she's on her way, but becoming involved with a fellow SEAL is an absolute no-no. When that fellow SEAL happens to be someone like Luke, well, resistance becomes rather futile. The love they have may be true, but will it come at the cost of their legacies?
This is my favorite read in the second batch of Salvation Society and for good reason. The author has put together a strong crossover novel, and that's saying something considering one of the two series was penned by someone else. Aara and Luke have such standout personalities, and their back stories demanded that their shared stored be as notable. The supporting cast of characters was also quite memorable, and they helped push Aara and Luke's story to even greater heights. This book is also a reminder that I have a whole lot of catching up to do with Rachel Robinson's lengthy back list. I'm giving Legacy five stars.
Date Read: 08 October 2020
Learn more about Rachel Robinson.
Purchase Legacy on Amazon.