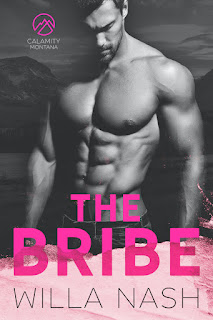 Note: An advanced reader copy (ARC) was provided by the author via Valentine PR.
Devney Perry's announcement a few months back about launching a new series under a pseudonym and releasing it under the Kindle Unlimited subscription program was one of the most newsworthy bits to come out of the romance world this year. Yes, Willa Nash is Devney Perry, and everyone knows it, but while the idea of having a different name may not make that much sense to some, what truly matters is how good of a read you end up getting in your hands--and The Bribe? Well, this series starter isn't just good; it's way better than that, and if the rest of the series is as great as this, then consider me addicted!
The Willa Nash brand launches with the first in the new small-town romance series, Calamity, Montana. If you're familiar with Devney Perry's Jamison Valley books, well this is the town neighboring the one found there. The Bribe introduces readers to the this small Montana town and there are already a number of notable personalities that I'm eager to get to know more as the series develops. We also meet main characters Lucy Ross and Duke Evans. When their paths cross, it's at a hiking trail in Wyoming and he rescues her and her best friend from a herd of stalker bison. She introduces herself as Jade Morgan, and it isn't until Sheriff Duke Evans stops her for speeding in his town of Calamity that he realizes that not only did she give him a fake name, but that she's actually award-winning and chart-topping country singer Lucy Ross. There's a reason she's in hiding, and the last thing she needs is for this hot sheriff to divulge her secret. Good thing she offered him a bribe he couldn't refuse. Too bad he's still asking questions.
This was a truly fun-filled read, one that refused to allow my attention to be diverted by anyone or anything for the two to three hours it took for me to fall in love with it. I loved the dynamic between Lucy and Duke as well as the role the town of Calamity played alongside that of its residents. I don't want to give a whole lot away in terms of the plot and any sort of twists, but what I can tell you is that there's a bit of suspense added into all that romance, alongside a balance of lighthearted moments and some heavier stuff. There's a point in the story where I my heart clenched in my chest as Lucy recounted an incident regarding her beloved dog, Spot. I'm a fur mom, so stuff like that, fictional as they may be, affects me. That aside, I adored the romance, and the mystery part kept me on my toes, plus I'm really looking forward to reading The Bluff! Five stars go to The Bribe.
Release Date: 15 October 2020
Date Read: 14 October 2020
Learn more about Willa Nash.
Purchase The Bribe on Amazon.