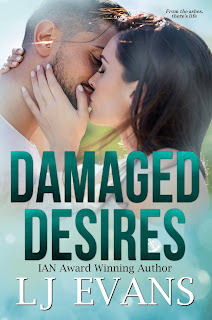 Note: An advanced reader copy (ARC) was provided by the author.
There's a reason why I've made it a point to read every single one of LJ Evans's releases. From the moment I read her debut release, I saw the promise she had as an author, and over the past three years (and a few months) since then, I've borne witness to her evolution as a storyteller. Her latest novel, Damaged Desires, is the fourth in her Anchor series, but if you've yet to read the first three books (Guarded Dreams, Forged by Sacrifice, and Avenged by Love), no worries because this does read well as a standalone.
This is the story of former political insider Dani Whittaker and Navy SEAL Nash Wellesley. Both are haunted by life-changing events in their recent pasts, each one dealing with the aftermath of real-life nightmares that happened to them. At a crossroads in each of their lives, their paths intersect but there's a constant hesitation to make that connection a more secure one. That is until Dani's new job puts her at the crosshairs of a fanatic and Nash steps in as her protection--but who'll protect either of them from the very real potential of a broken heart when everything's ultimately been said and done?
With a seemingly steady and sure hand, LJ Evans has given readers a story with a consistency in terms of flow and cohesiveness and characters whose development demand to be witnessed because of the emotional investment we've put into them. My heart broke for both Dani and Nash, but there was this constant thrum of admiration as well, given how far they came in their journey. There's anticipation all around, from the romance itself between Dani and Nash to the more suspenseful mystery aspect of the story. Dare I say that Evans has outdone herself Damaged Desires, which earns five stars.
Release Date: 26 October 2020
Date Read: 26 October 2020
Learn more about LJ Evans.
Purchase Damaged Desires on Amazon.