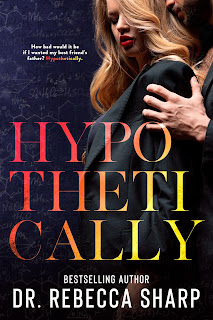 Note: An advanced reader copy (ARC) was provided by the author via Wildfire Marketing Solutions.
Hypothetically is a novella from Rebecca Sharp, and features a May-December slash taboo connection between the main characters, Damien Milanovic and Lilith Montgomery. If these two sound familiar, then you'll remember that they were in Sharp's Odyssey duet as Troian Milanovic's father and best friend, respectively. That being said, this novella can pretty much be read separately from The Fall of Troy and The Judgment of Paris. Here we have Damien, a chemist on the verge of the sort of breakthrough that could change countless lives, and Lilith, a gifted student who hopes for an internship with Damien. The two have been quietly lusting after each other, and giving in may lead to consequences affecting more than just them. What if it was worth it anyway? Hypothetically speaking...
This was a quick read, and everything unfolds at a fast clip. There's a lot of heat early on, and there's no denying that Damien and Lilith had some sizzling chemistry from the get-go. Theirs isn't some epic love story, or at least, it didn't feel that way to me. Maybe it's because I read the author's Odyssey books, which remain my favorite from her, so I already had certain feelings towards Tory's father and former best friend. My emotional investment was substantial as I would have liked, but Rebecca Sharp's writing remains the biggest draw for me. So while the main characters didn't click with me as much I'd hoped, Sharp's ability to write as well as she does makes Hypothetically a 3.5-starred read.
Date Read: 21 October 2020
Learn more about Dr. Rebecca Sharp.
Purchase Hypothetically on Amazon.