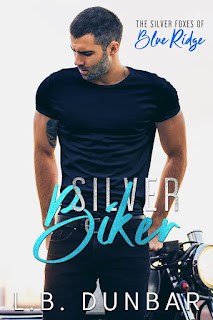 "Fuck," I groan. "What do you want from me?" I'm suddenly bone-tired. "I just don't know what to do for you, how to be what you need. I don't know that I'm that rock anymore."

"You never had to be the only thing we stood on, James. I just wanted you to need me," she says and walks to the bathroom, closing the door behind her.

It looks like L.B. Dunbar has saved the best for last because this fourth and final Silver Foxes of Blue Ridge novel was everything I could have hoped for in a second-chance romance AND a series ender. Silver Biker features forty-eight-year-old James Harrington, the last among the Harrington siblings yet to get his happily-ever-after. The thing is, he was already living his happily-ever-after, one that began nineteen years ago. He had a wife he loved and a son he adored, but six years ago, everything started to crumble. He pushed away the only woman he's ever loved, the only contact between them limited to a yearly phone call. When forty-five-year-old Evelyn Harrington nee Fitzpatrick misses making that call on their sixth year apart, James is shattered, but then the woman who continues to own his heart returns to Blue Ridge from Atlanta. The reason? She wants a divorce. Does James give in and set his Evie free or will he finally fight for their forever?
There was so much about this book that was so darn heartrending. What James and Evie had to go through was difficult beyond words, and something no parent should have to experience. This erstwhile couple had so much scar tissue left behind, but that gaping wound never fully healed, not with how everything played out afterwards. L.B. Dunbar did such a fantastic job crafting this story about two people who still loved each other and were trying to live their individual lives but remained tied to one another. Silver Biker was a beautiful tale of family, love, forgiveness, and healing, and it snags five-plus stars.
-------------------------

Read my reviews for the Silver Foxes of Blue Ridge series: