Review: The Other Man by Nicole French (Rose Gold #1) 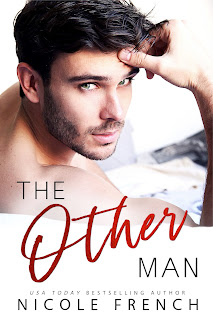 The Other Man is the first full-length novel in Nicole French's Rose Gold series, although there was a prequel, The Scarlet Night, which was released a few months ago. The series itself is a spin-off of French's Quicksilver series, although you can dive into this new series without having previously read the earlier series. Here we have Matthew Zola, a city prosecutor who has set his sights on Calvin Gardner. The unscrupulous man is the subject of his current investigation, but what makes things far more complicated is the woman he's married to: Nina Astor de Vries Gardner. It was three months ago that he shared one night with her--a night that branded itself into his heart and mind. Now, she's back in his sights, and good sense dictates that he stay as far away from her as possible. He's worked too hard and too long to risk this case and his career on one woman. But then, good sense goes out the window when it comes to anything and everything Nina. Matthew doesn't want to be the other man; he wants to be the only one in Nina's life, but will the price be too high for either of them, and if he pays, will Nina be worth it?

Oh, Matthew, Matthew, Matthew... Goodness but how this man has got me all tied up in knots! But then that's what happens when a main character is created with as much personality as him. When he sets his mind to something, there's simply no dissuading him, and here, it's clearly none other than Nina. Does he know it's wrong to want her as much as he does? Yep, but again, this is Matthew Zola we're talking about here. This first full-length novel had me on the edge of my seat, desperately trying to see how he and Nina are going to hold it all together in spite of everything that fate appears to slinging their way. This book demands your full attention, and trust me, it's difficult to be swayed by anyone or anything once you have this open in your reading app. The prequel, The Scarlet Night, whetted my appetite, and darn it, I have yet to have my fill of Nicole French's writing, this story, and her characters. Hold on tight because the ride doesn't end with this book. Prepare to become fully and emotionally invested because Matthew Zola has set the bar freakishly high for heroes to come. Five stars go to The Other Man. ♥

Read my reviews for the Rose Gold series:

The Other Man (book one) - five stars - My Review (posted above)

Purchase The Other Man on Amazon | Apple Books | B&N | Kobo.