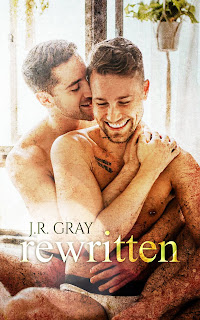 Oh, the angst! Goodness me, but how this book made the angst addict in me absurdly sated. Rewritten is the second novel in J.R. Gray's Unscripted series, and while the main characters got a happy ending in the first book, it was obviously more "happy for now" than "happily ever after". I highly recommend you read Unscripted before reading Rewritten in order to have a better understanding of how Quellcrist King and Hale Evans's friendship started and evolved into much more.

Quell King and Hale Evans's relationship as lovers is still fairly new, but their time together is limited, what with both of them preparing for their next film projects. Quell refuses to hold Hale back from the life-changing opportunities he knows are there for the taking. However, the doubts swirling in his head have caused his depression to hit him harder than ever. On the other hand, Hale relishes his new role, but guilt eats at him. Both men want everything to be okay, but could these two be left with nothing more than what could've been?

Fair warning: This is an emotionally heavy read. I have a thing for angst, but I know it isn't everyone's cup of tea, so this is a heads-up. Quell's depression and Hale's bouts of guilt and their joint struggle to be anything and everything their partner needs and deserves weighs on them heavily, and J.R. Gray paints a heartrending picture. The writing itself was good, but even being as much of an angst addict as I am, putting these two through even more of a wringer than in the first book was torturous for them. They do finally--I hope!--get their HEA though, so yay. Rewritten receives four stars. 🖤