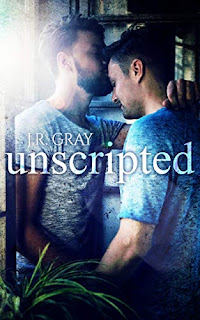 If I had to base my rating on story alone, J.R. Gray's Unscripted would definitely get a higher rating. For the most part, I was drawn to the main characters, Hollywood actors Quellcrist King and Hale (whose last name I can't recall ever being mentioned throughout the book)--with Quell being the far more established box office draw and Hale the struggling ingenu turned aspiring actor. Their struggle with keeping their feelings in check is complicated further by Quell's depression and his questionable marital status and promises made to his now-estranged wife. With Quell and Hale working together as leads in an upcoming and highly promising series, Quell finds himself discovering a side to himself that he didn't think possible, but while Hale may want nothing more than Quell's love in return, is their any hope for them when he's out in the open about his sexuality but Quell is on the fence about almost everything else?

The story held such promise, and for about the first half of the book, I was smitten, editing issues aside. But then there was a whole lot of back and forth, and most of it leading to nothing much being resolved because of Quell's hesitation when it came to being open and honest about the status of his marriage. Here's the thing: he already shared it with one other person, yet he wasn't able to when it came to the man he now considered his best friend and someone he was developing intense feelings for? Argh! And speaking of the editing, there were numerous ones, and while things like misspelled or misused words are considered minor, the lack of transition between several chapters and scenes (leading to abrupt shifts), the continuity issues (i.e. Quell bemoans the ten-year age difference between him and Hale, but early on, Hale says he's twenty-five, and Quell mentions in a later chapter that he's twenty-nine), and a tendency to be repetitive at times did prove to be bothersome, enough that I was distracted.

All things considered, Quell and Hale had me invested in their story, and even when my attention waned in the latter half, I was still cheering them on towards their happily-ever-after. That being said, I know not everyone was a fan of how the book ended, with them pointing out that it felt more like a happy-for-now than an honest-to-goodness HEA, but not all endings require marriage and children to be considered HEA, and I felt the ending here was very much in line with who Quell and Hale were. Kudos also goes out to the supporting characters, namely, Mel, Ella, and Rachael--yes, I'm including Quell's kinda-sorta ex-wife because even as a villain, she was rather memorable. At the end of the day, I'm going to go with the rating that was in my head when I finished the book and it's the one that has stuck with me since then. Unscripted gets four stars. ♥