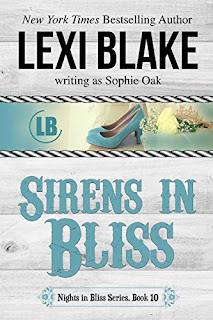 I may have to officially name this tenth Nights in Bliss as my favorite in the series! Re-released this month with new content, Sirens in Bliss takes characters from Lexi Blake's (writing under her pseudonym of Sophie Oak) two popular series that mix BDSM with polyamory, Nights in Bliss and Texas Sirens. If you're familiar with both of these series, you'll know that this isn't the first time there have been crossover characters, but this is the first time that there's been as much of influx of them as I've ever seen so far. Blake notes that this book is not meant to be read as a standalone, and I wholeheartedly agree. In order for any reader to fully enjoy this novel, having previously read the other books in Nights in Bliss and Texas Sirens is the only way to go. They're lengthy reads but loads of fun with humor and suspense and a whole lot of steam. Bliss, Colorado (and Texas!) is a town you won't regret visiting.

The wedding of brothers Leo and Wolf Meyer to their submissive, Shelley McNamara, brings together beloved characters from the two re-released series penned by Sophie Oak and, as expected, it's one heck of a quirky read! Life is never boring in Bliss, and excitement fills the air, not just for the wedding but as families and friends reunite from both Colorado and Texas to celebrate. I enjoyed seeing so many familiar characters and seeing where they were in their respective lives and how their relationships were all flourishing. As always, there's a lot of lighthearted humor, but there's also some angst and drama because even though these couples and throuples got their proverbial happily-ever-afters, we see that life after the HEA isn't always happy 24/7 and that relationships don't just need love but communication and honesty as well. Sirens in Bliss was a five-starred blissfully great read. ♥