Review: Back in Bliss by Lexi Blake writing as Sophie Oak (Nights in Bliss #9) 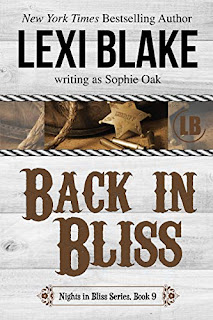 We're back in Bliss, Colorado with the ninth novel in bestselling author Lexi Blake's Nights in Bliss series, and it's one of my favorites in this particular collection. Originally published in 2013, Blake has re-released Back in Bliss and if you're familiar with the series, then Logan Green should be a familiar figure. The guy went through the wringer while serving the small town of Bliss as a deputy sheriff, and when things got too much, he leaves his hometown and heads to Texas in hopes of regaining a semblance of the peace of mind he so desperately needs. Years pass, and now Logan has made his way back to Bliss and is back in the sheriff's office, only this isn't anything permanent for him, choosing to bide his time before he leaves again. He finds out that his best friend, Seth Stark, is back in Bliss as well, but when he sees who he has on his arm, Logan is taken aback. Georgia Dawson's path crisscrossed with Logan's, and neither one has forgotten the other in all this time. She's returned to Bliss to help her boss out, yet Seth has something else in mind for Logan, Georgia, and himself. Could it go awry when danger comes along?

I've been eagerly awaiting Logan's story ever since his life changed forever in Found in Bliss, and he's come a heck of a long way since then. He had somewhat of an innocence to all those books ago, and readers who are familiar with the series know that the events from before truly traumatized him and he was a different person from whom he was in very early on in the series. Of course, nothing comes easy when it comes to Logan's happily-ever-after, and the guy had all his issues in the forefront, battling with this opportunity to finally have the home and happiness that he's been hoping for in the form of Seth and Georgia. Speaking of Seth, can I just say that he was such a great guy and that the man had a whole lot of patience but also did what was necessary in order to push Logan forward? I loved how he and Logan were like the perfect counterbalances to each other and that Georgia was the one who centered them both. As has been my habit, I'm going to recommend that you read the Nights in Bliss series in order to have a better understanding of the town, and check out Texas Sirens too because there are several overlapping characters from both those epic series, but feel free to dive in. Back in Bliss receives five stars. ♥

Purchase Back in Bliss on Amazon | Apple Books | B&N | Kobo.