Review: Starting from Scratch by Lane Hayes (Starting From #2) 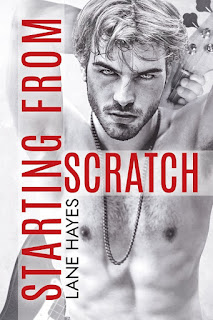 “I don't want to be with anyone else and if you feel the same way...”

“I'm positive, Char. I don't want to be anywhere else or with anyone else. I have no clue how to make you want me as much as I want you, but I'm okay to just hang out and try to make you laugh. I'm not gonna question it. I'm too grateful to wonder why, and I don't want to jinx it.”


Ummm... When is too soon to re-read a book you just read? Because, you see, I may be needing another Ky-and-Charlie fix ASAP. Starting from Zero was a tough act to follow, but it's looking like Lane Hayes's Starting From series is going to give my current favorite--the Leaning Into books--a run for its money. This a story about two people who seem like absolute opposites and have an affinity for pushing each other's buttons but ultimately find common ground and a mutual attraction that could very well turn out to be more if only they give themselves a real chance.

Twenty-five-year-old Charlie Rourke has made a name for himself as a social media influencer, but managing the up and coming band that is Zero is a whole 'nother beast of a mountain for him to conquer and he's still just getting his bearings. The guys in the band, however, are great to work with, and Charlie considers them his brothers. Well, maybe not all of them. Kyle Baldwin is twenty-eight and the epitome of a California dude who loves to skateboard and surf, and while he's a good bassist, Charlie believes Ky has plans of quitting Zero sooner or later.

Ky Baldwin is pretty sure that Charlie Rourke doesn't like him, but that doesn't stop Ky from wanting to get to know the guy better. There's also no stopping his insane attraction to the chatterbox who has no qualms putting him in his place. He's set his sights on winning Charlie over and finally acting on their attraction to each other. Sure, Charlie may think he's straight but Ky's never been into labels, and all that matters to him is that he wants them to take a real shot at something, whatever it may be. But will the best of intentions lead to the worst of heartbreaks?

GAH!!! Ky and Charlie were such an unexpected surprise. I loved these two individually, but whenever they were together--and this includes their encounters even prior to them becoming a couple--there was always this spark that was just waiting to catch fire. Each one had baggage, and so the idea of starting from scratch may seem overly idealistic, but it wasn't about forgetting their past but simply not allowing it to have a foothold on their present so as not to affect their future. They also had button pushing and bullshitting early on, so starting fresh was necessary.

There was a whole lot to love about this book. The main characters had such strong chemistry between them, and the supporting cast of characters were there as added flavor to the story without overpowering the overall taste and feel of it. In short, there were no scene-stealers. I did, however, have a favorite supporting character, and that was none other than Oliver, aka Ollie, Charlie's nine-year-old brother. I adored this kid, and not just because he happens to share the name of my beloved dog. While the adults made things complicated, he kept it all so simple.

Another favorite about this second Starting From story had to do with the idea of family. Charlie had his father and his godfather, as well as his little brother, but he also found a band of brothers--pun not intended!--with Zero, not including Ky, of course, because there was nothing brotherly going on with them! I liked how Charlie's relationship with his dad went in a more open direction. With Ky and his own family, well, it may have been more dysfunctional, and my heart did break for him, but I loved how he finally handled things with his estranged father.

There was the side story regarding finding a record label that would be the perfect fit for Zero, and what ended up happening was what I'd been saying to my tablet while reading. I'd like to think Charlie listened to my unsolicited advice, but that opens up the possibility to what I REALLY hope will be the next book in the series, one that I think will be the true enemies-to-lovers tale because I didn't consider Charlie and Ky as enemies. Yep, I'm already excited for book three even as Lane Hayes has left me in such love with book two. Five-plus stars for Starting from Scratch! ♥

Purchase Starting From Scratch on Amazon.