Review: All Screwed Up by Beth Bolden & Brittany Cournoyer 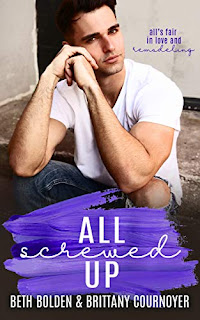 Note: An advanced reader copy (ARC) was provided by Neon Rainbow ARC Reviews.
I've enjoyed Beth Bolden's and Brittany Cournoyer's work as individual authors, so I was curious to see how they would meld as a writing team. All Screwed Up is their first foray together, and this standalone had an enemies-to-lovers feel to it. Griffin Caldwell has moved three hours away from everything he's known to start a new job as an assistant manager at a pet store. He's even bought a house that looked good in the photos he saw; unfortunately, reality bites and it's bitten Griffin badly when the place turned out to be more money pit than fixer upper. Finding a contractor to work on the place is easier said than done, but then someone recommends David Webber, and he seems to know what he's talking about and done. But as adept as the guy is when it comes to his job, he's also grumpy, impatient, and rude--and numerous online reviews concur! These two push each other's buttons, but there's also a thrum of unspoken attraction between them Can they find some middle ground before everything around them comes crashing to the ground?
This book was, for all intents and purposes, an entertaining M/M romance. It was a fairly quick read, but it was rather well-conceived and developed. It had lighthearted tone to it, with sprinklings of angst. Griffin and David had the expected back and forth happening, what with David getting frustrated with Griffin's questions and insistence in participating in the actual demolition and with Griffin calling David out on his rude behavior. The kittens were certainly a cute way of kinda-sorta-maybe bringing the two together on common ground, and the names given to them brought a smile to my face because I named four pups from about a dozen years ago the same. There aren't that many supporting characters, although the notable ones include David's father, Carl, and best friend, Evie, who may or may not have had a thing going, but that's just me. The "villain" in the story isn't nefarious, more like a pesky PITA who shows up now and again to poke at David. Though a bit repetitive at times, All Screwed Up was a pretty good 3.5-star read.
Release Date: 06 November 2020
Date Read: 04 November 2020
Learn more about Beth Bolden and Brittany Cournoyer.
Pre-order All Screwed Up on Amazon.