Review: Make Me Yours by Melanie Harlow (Bellamy Creek #2) 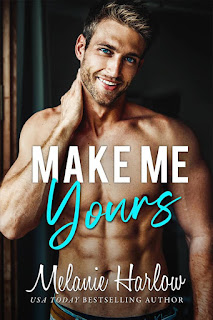 "But like you said, it wasn't what I was looking for. Not at all."

I nodded slowly, the jealousy fading away. "What were you looking for?"

He cradled my face with his hands and kissed my forehead. "The girl next door."

Ah, Melanie Harlow knows the way to my heart, and she's exceeded my expectations yet again with the release of the second novel in her Bellamy Creek series. Make Me Yours is single-parent romance with falling-for-your-sibling's-best-friend vibes to it. The main characters here were introduced in the series starter, Drive Me Wild, but both books can be read independently of each other. However, I highly recommend you read the first one because it's a really great small-town romance and wonderful kick-off to what's already proving to be the sort of series that I pretty much suspect I'm already hooked on.
Cole Mitchell and Cheyenne Dempsey were next-door neighbors for years. The fact that Cole and Cheyenne's older brother, Griffin, were best friends made Cole a constant in Cheyenne's life. It shouldn't have come as a surprise to anyone that she had an enormous crush on him as a teenager, but when Cole got married, Cheyenne realized it may be time to move on. Fast forward more than a decade later, and Cole is back living with his mom in the house he grew up in, and Cheyenne is back at her family's place. A widower for nine years, thirty-three-year-old Cole has little time for dating when his world revolves around his nine-year-old daughter, Mariah, and he's busy with his work as a cop. No one's caught his interest since he lost his wife. Or maybe someone has, and that someone just happens to be his best friend's sister: thirty-year-old kindergarten teacher, Cheyenne.
This book was sweet and sexy and all the good stuff in between. Melanie Harlow always manages to add her own touch to well-worn tropes so that it feels like something you haven't read before. When readers were clued in to the fact that Cheyenne had feelings for Cole in Drive Me Wild, I just knew theirs would be a story worth waiting for, especially given that Cole was a widower with a young daughter to raise. Their story was lighthearted, but there were definitely moments of angst--and you won't be hearing complaints from me! I loved seeing how they were together, but there was something extraordinary when they had Mariah with them. That's one of the things I love best about Harlow's writing--at its core, her series are about finding love, cherishing family, and appreciating home. Once again, she's given her readers all of that and more in this series and in this book. I adored Cole and Cheyenne, and of course, Mariah, as well as their respective families plus circles of friends. Make Me Yours easily receives five-plus stars.
-------------------------
Read my reviews for the Bellamy Creek series:

Purchase Make Me Yours on Amazon.