Release Blitz: We Have Till Dawn by Cara Dee 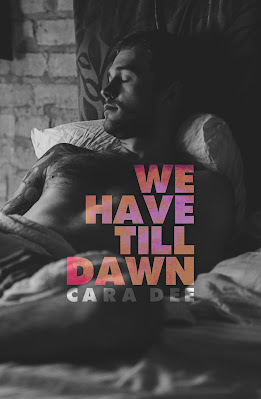 We Have Till Dawn
by Cara Dee
Release Date: November 19, 2020
About We Have Till Dawn
It wasn’t like he’d never done this before...
Nicky Fender retired from sex work two years ago and never looked back. Then an offer he can’t refuse comes his way, and he agrees to one last exclusive arrangement. Good money and an apartment in Manhattan? He’d be a fool to turn that down.
The deal is dusk till dawn for two months. But once he meets Gideon—an older, quirky, autistic, filthy, uncertain businessman who wants to explore his sexuality—Nicky wishes sunrise would never come. 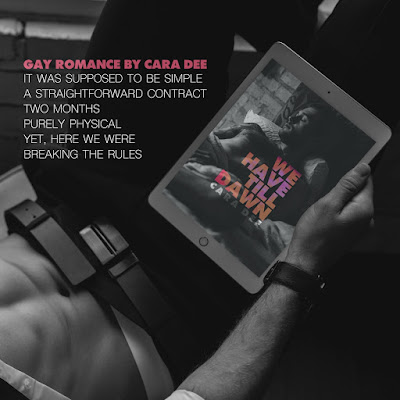 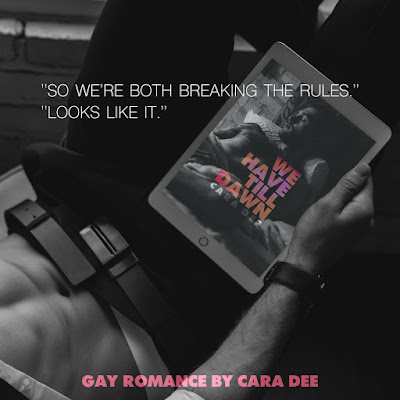 An Excerpt from We Have Till Dawn
Nicky Fender
“Let me get this straight,” I said, scanning the document. “The wife is the client? I mean, she’s the one setting her husband up with a male escort?”
“Correct.” Tina sat back as our server approached with dinner. “Well, her fiancé.”
I hummed and kept my mouth shut until we were alone again. Fuck, the pizza looked good. Of course, meeting with Tina meant it had to be some fancy pizza. She wouldn’t be caught dead with a regular slice. She wouldn’t be caught dead in Brooklyn either, which was why I’d met up with her in Manhattan at some swanky Italian place. But hey, she was buying.
“I’m waiting for the reason for why I’d agree,” I admitted bluntly. I hadn’t whored out my sweet ass in two years, and I was doing much better now. I worked three jobs for very little pay, I lived with my big brother, and I had practically no time for any hobbies. What’s not to love?
I’d thought about going back to Tina for some time, but whenever I considered it, there was this rock in the pit of my stomach that no amount of money could crush.
“I wanted you to see the requirements first,” she replied.
Well, there were a lot of them. I hadn’t gone through the entire list yet. After placing the document next to my plate, I cut into my fancy pizza and continued reading the list. There was plenty on hygiene, but nothing that went beyond what I was used to. I was to be blindfolded the whole time? All right… I’d never see the client’s face—or the client’s fiancé—which wasn’t necessarily a bad thing.
“I get the impression from the client that the man wants to explore something before he agrees to marry her,” Tina revealed. I’d heard of weirder dynamics. “She hinted that it would be a one-time arrangement, and she placed emphasis on following instructions that seem to cover every inch of your body.”
Lovely.
“That’s a lot of exploring,” I pointed out. “He wants to meet with me four nights a week for two months.”
Tina lifted a shoulder in a slight shrug and sipped her wine.
More specifically, I had to be available for him between the hours of ten PM and six AM on Tuesdays, Wednesdays, Thursdays, and Saturdays.
I scratched my ear.
The pay better be out of this world, ’cause I would have to quit at both Applebee’s and Starbucks. Not that I’d mourn those shifts, but I’d been at Applebee’s long enough to possibly make assistant manager when the current one quit next month. She was having a baby and moving to Jersey.
I stuck a piece of pizza into my mouth and eyed the requirements for safety, at which I almost choked on a pepperoni slice.
“How loaded is this couple?” I asked through a cough. The man demanded exclusivity, meaning I wasn’t allowed to be sexually active with anyone else for the duration of our arrangement. And that cost a fucking mint.
“Read on…” Tina smirked wryly.
I furrowed my brow—then spotted one of my few hard limits. I shook my head and wiped my mouth with the napkin. “No fucking way. Tina, you—no. Fuck this.”
I didn’t mess around without protection. Not a chance in hell.
“This is why I asked you, Nicky,” she told me patiently. “Considering your stance on protection and your sad little Facebook statuses on how single you are—” she ignored my glare “—not to mention that you’re not the type of guy who walks around with a string of hookups, I can count on you passing a screening with flying colors and taking on someone who wants exclusivity. You’re my only candidate.”
“Candidate to say no,” I retorted.
Tina adopted a smug expression and reached down to dig something out of her purse. “There’s a reason I wanted to save the perks for last,” she said. “Okay, so you know the requirements. An exclusive arrangement for both parties—during which you’re sexually active only with each other—four nights a week for two months. You won’t see him. He won’t violate your limits—”
“Going unprotected is a limit, Tina,” I grated. Fuck, I was getting pissed. Part of me had carried foolish hope that this would be such a golden case that I’d jump on the opportunity and earn some good dough before the rock in my stomach returned.
“And when you’re an escort dealing with multiple clients a week, nothing else would make sense,” she answered, extending another document to me. “I wouldn’t even try to approach my other sex workers with this, Nicky. You’re the exception only because you quit the field.”
“Hmpf.” I cast a disgruntled look her way before I lowered my gaze to the piece of paper.
Ahem.
Holy fuck.
Three grand a week—minus Tina’s finder’s fee of ten percent—plus living arrangements. There would be a studio apartment in my name, so to speak, rent and utilities paid for by the client. Corner of West 39th and Ninth Avenue—not a shabby address at all. One of my best friends lived in the Garment District. Adjacent to Hell’s Kitchen where another friend lived.
A Manhattan address and $3,000 a week for two months.
A guy could do worse.
I shifted in my seat and cleared my throat. “Is there, uh, any way to ensure safety by making sure the guy gets tested too?”
“Of course, Nicky.” The compassion in Tina’s crystal-blue eyes reminded me of the fact that she ran an ethical business based on choice and vetting. She didn’t headhunt sex workers; they had to come to her, and they—we—had to go through a selection process before she could, in good conscience, give us work.
Today, I was an exception for her, and my answer would be an exception too.
’Cause it looked like I was moving to Manhattan. 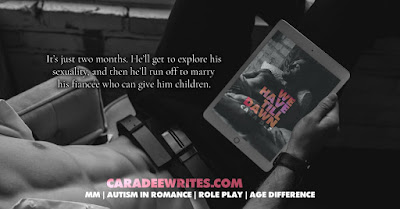