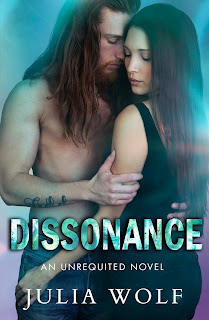 Note: An advanced reader copy (ARC) was provided by the author via Wildfire Marketing Solutions.
You know the One Direction song, History? Well, the main characters of Julia Wolf's third Unrequited novel had loads of it, and goodness, unboxing all of it gave me a better understanding of why Yael Aronson and Alexander Murray were the way they were towards each other in the previous books. Dissonance is their story, and they sure as heck had an enlightening and entertaining one to share. A quick note: Each book in the series can be read as a standalone, but if you're like me, you're going to want to read these in order because of the recurring cast of characters and the high possiblity of a few spoilers.
Yael Aronson and Alex Murray have known each other for a decade, but that doesn't mean that they're close. They're not even friends at this point. Their joint past is storied and it goes back to even before fame and fortune came Alex's way as part of the rock band Unrequited. There was always a great deal of tension between them, and they pushed each other's buttons relentlessly. However, when Yael needs someone to be her fake boyfriend to a wedding where her ex will be, it's Alex who readily volunteers. Seeing her ex-boyfriend will give Yael closure, but being with her fake one may open her eyes--and her heart--to a version of Alex she refused to believe was even possible to truly exist.
Goodness, but how I loved the angst in this book, and the fact that readers FINALLY delve deeper into Yael and Alex's story. My heart broke for these two time and time again, but if there's one thing that they've proven, it's that the heart is a resilient organ, one that does break but ultimately heals as well. These two also happened to have an awesome support system, and I liked how they surrounded themselves with people who want nothing but happiness for them. Dissonance lived up to my expectations quite nicely indeed. 4.5 stars.
-------------------------