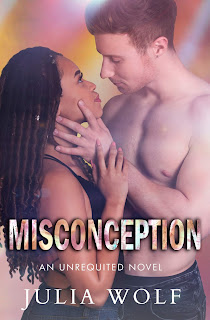 Misconception is the second novel in Julia Wolf's Unrequited series. Thirty-four-year-old Michaela Ashwood knows all too well how rock stars, which is why she knows better than to become romantically involved with one of them. But one night on Vegas has her crossing paths with Moses Aronson. Not only is he the lead singer for Unrequited, he also happens to be only twenty-six, making him eight years younger than her. So, how could she have ended up not only sleeping with Mo, but married to him, too? The clincher? Mic realizes she's pregnant a few weeks later. She's all for becoming a mother, but being the wife of a rock star, one as young as Mo? Well, that's a whole 'nother thing.

I wonder if I would have a better appreciation for this book had I read the author's previous series, Blue Is the Color, which is where the Unrequited series has been spun off of. To be fair, I quite liked Mo. He was someone who cared a great deal about the people who mattered most to him. It was clear that he had very strong feelings for Mic. It took quite some time for me to warm up to Mic, and that was lukewarm at best. I think a lot of that had to do with personality and the fact that she was wary of opening herself up to Mo. I love an age gap romance where the woman is older than the man, but I had to remind myself several times that there was an eight-year age gap because Mic didn't come off as all that mature most of the time. Still, Julia Wolf's writing was good, and my adoration for Mo never waned, so all things considered, I'm handing Misconception 3.5 stars. 🖤