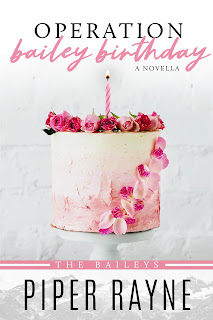 Note: An advanced reader copy (ARC) was provided by the authors via Wildfire Marketing Solutions.
Waaaaah! I can't believe we've come to the final book in the Baileys series! I've grown so darn attached to this finally created by the writing duo of Piper Rayne, and while they've mentioned that the Baileys will make appearances in the upcoming Greenes spin-off series, I'm still going to miss them being front and center. It was back in February of 2019 that Piper and Rayne introduced this wonderful family and the town of Lake Starlight, Alaska to readers, and here we are, a year and nine and a half months later, we bid them adieu. Maybe not a final goodbye since we'll be seeing them again, but it's a long enough pause that I was already going through withdrawals WHILE I was reading this novella.
Operation Bailey Birthday is the twelfth book and the third novella in the Baileys series. The Bailey whose birthday is about to be celebrated is none other than Grandma Dori, and rightly so since she's been such a driving force through the series. This time around, Piper and Rayne give readers the points of view of the next generation of the Bailey clan, and considering there were NINE Bailey siblings to begin with, there's a slew of G'Ma D's great-grandchildren to go through, and I don't think we even "heard" from all of them. We also get a peek at the first couple to be featured in the Greenes series starter, and I've already got that title added to my list of most anticipated reads for 2021. I loved seeing how far the couples and the families they now have were doing as well as how the bond they shared as an entire unit remained as close-knit as ever. There was a bittersweet feeling reading Operation Bailey Birthday, but it was a five-starred end to this fab series.
-------------------------