Review: A Wright Christmas by K.A. Linde (The Wrights #7) 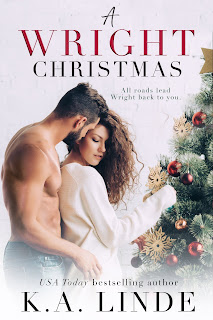 Note: An advanced reader copy (ARC) was provided by the author via Wildfire Marketing Solutions.
K.A. Linde returns to the Wright book universe with a holiday romance. A Wright Christmas is a second-chance romance featuring Peyton Medina, a professional ballet dancer, and Isaac Donoghue, a project manager at Wright Construction. When Peyton made the decision to pursue her dream of becoming a prima ballerina, it required leaving behind her hometown of Lubbock, Texas, her family, and her boyfriend. Nearly seventeen years later, she's back. Taking a break from her role as principal dancer in New York, she's returned to help her former mentor turned artistic director of the Lubbock Ballet Company with their upcoming production of The Nutcracker. Peyton knew chances were high she'd cross paths with her ex, Isaac, while she was in town, but she certainly didn't expect it to be at the studio while he was picking up his five-year-old daughter, Aly. The undeniable attraction is still there, but will they risk reconnecting and the potential of more than just their broken hearts since she's leaving after just a month?
While the Wrights do make cameo appearances in this book, the story is not centered around them. Instead, the spotlight is on someone close to the family, Isaac Donoghue, who was an interesting main character. The same goes for Peyton Medina, and I liked seeing the connection they shared with one another and appreciated that hint of awkwardness when they saw each other again after all those years apart. There was a bit of confusion on my end regarding how old they were, however, because Peyton is mentioned as being thirty-three while Isaac is thirty, and since they broke up more than sixteen years prior, that would have made her seventeen (as stated in the blurb) and him fourteen. That aside, I did enjoy how Peyton was able to reconnect, not just with Isaac, but with her roots in Lubbock as well. I also liked how Isaac always put Aly first yet recognized that he also had to prioritize himself and his happiness. A Wright Christmas was a sweet four-starred return to all things Wright, and I look forward to more in 2021.
Date Read: 14 November 2020
Learn more about K.A. Linde.
Purchase A Wright Christmas on Amazon | Apple Books | B&N | Kobo.