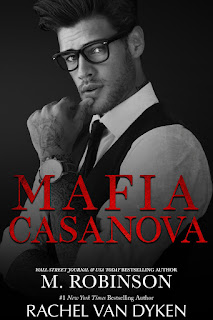 Note: An advanced reader copy (ARC) was provided by the authors.
I love how this book has allowed me to read something penned by one of my favorite go-to authors while also introducing a new-to-me author to my consciousness. Mafia Casanova is the book and Rachel Van Dyken and M. Robinson are the aforementioned authors. To be fair, the latter has been recommended to me a couple of times by one of my friends who happens to be a fellow romance reader and blogger, and I'm glad I finally had an opportunity to experience Robinson's writing for myself. This book is a standalone, meaning you can dive right in without needing to read any prior releases from either author, but hopes are high--and well-founded, dare I add--that this could very well be just the beginning of even more to come from this new creative writing twosome.
Romero Sinacore is called the "Mafia Casanova" and for good reason. At twenty-seven, he is every bit the charmer he's always been, and it's that charm that's made him the best at what he does. You see, the man nicknamed "Romeo" easily brings a woman to "la petite mort", aka the little death, just as easily he could cause the death of someone that was deemed worthy of such a fate. This is the legacy that he's always known he would live out, and because of it, he knew early on that there were certain things he would have to let go of. But years later, the time has finally come for him to reclaim what was once his, and this time, he has no intention of ever letting her go again--no matter what it may cost.
This book had me, hook, line, and sinker, and for the two to three hours it took me to read it, there was nothing and no one that could have taken away my attention. My sole focus was on Romeo and Eden, and where their story present was, where it had once been, and where it could possibly go. They were so intrinsicly tied to one another, but there were complications. It takes a heck of a lot for me to be as emotionally invested in a story that has a love triangle in it than one, particularly when the third person involved happens to be one of the main characters's sibling, but with writing as good as what M. Robinson and Rachel Van Dyken brought readers here, how the heck could I resist? With every turn of the page, I was drawn more and more into this intriguing story of love, loyalty, and the Famiglia. Mafia Casanova is a five-starred read, and that ending has me excited for more.
Release Date: 17 November 2020