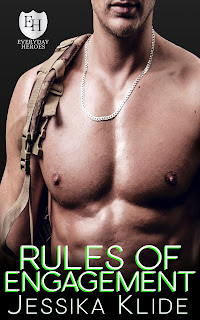 Note: An advanced reader copy (ARC) was provided by the author via Grey's Promotions.
Jessika Klide is a new-to-me author and my first-ever read from her is her contribution to the Everyday Heroes World inspired by bestselling author K. Bromberg's series, Everyday Heroes. Klide's Rules of Engagement features Jocko Malone, cousin of the Malone brothers featured in the original Bromberg series. Six years after he graduated from high school and kissed the girl he's wanted ever since he was a sophomore and saw her, the newbie freshman, Jocko is back in his hometown of Sunnyville. He's put in his years as a Navy SEAL, and now it's time for him to replant his roots and to finally pursue Jorja Jones. That kiss he gave her right before he started his training left quite an impression, but maybe not quite the sort that he intended. Jorja being assigned to write an article about him and his retired military dog Lucifer may be the the right opportunity for some shock and awe.
As far as introductions go, this was an okay one to Jessika Klide's writing. I enjoyed the story as a whole, and found myself interested to a degree. Funnily enough, it was Jocko's relationship with his dog, Luce, that had me most fascinated. You could tell that these two shared a strong bond, one that is often the case when it comes to dog and handler, but it was also more than that, especially given that both had retired from military service and are back to being civilians. I did find it a tad strange that the kiss Jocko gave Jorja was perceived as scandalous by some, and his lack of communication during those six years apart was never satisfactorily explained. As for the writing itself, countless conversations felt oddly stiff and the flow of the story stilted, no thanks to the author's penchant for not using contractions. I do wish I liked this more than I did, but bonus points for an unforgettable furry character that stole the show. Rules of Engagement receives 3.5 stars.
Date Read: 17 November 2020
Learn more about Jessika Klide.
Purchase Rules of Engagement on Amazon.