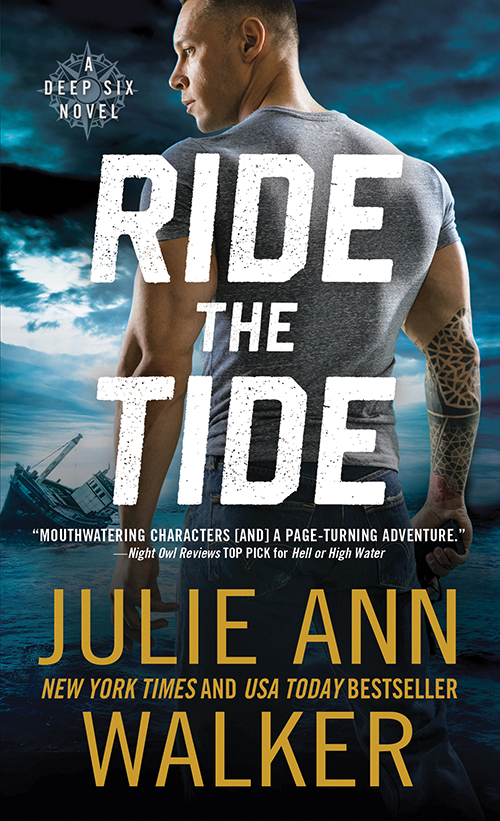 About Ride the Tide
Once a fighter, always a fighter...

Former Navy SEAL Mason McCarthy is done being a fighting man. Now he and the Deep Six Salvage crew are working feverishly to find the wreck of the Santa Cristina and its legendary sunken treasure. Unfortunately for Mason’s peace of mind, chatty, brilliant historian Alexandra Merriweather has joined the hunt and there’s no avoiding her. Alex is exactly the kind of distraction Mason can’t afford right now…or maybe ever.
When a murderous enemy from Mason’s past threatens the Deep Six, he must rely on old instincts and the skills he honed from years of running black ops to make sure nothing touches Alexandra. But with their lives on the line and the adrenaline running high, it’s inevitable that sparks will fly.

Add Ride the Tide on Goodreads.

An Excerpt from Ride the Tide
Mason “Monet” McCarthy had a problem.
She was five feet tall. Had curly red hair that was only fifty percent tamed under the best of conditions, and one hundred percent out of control this early in the morning. And she was sitting at a table by the window watching the multicolored ships of the shrimp fleet as they rocked precariously with the wave action out near the horizon while her fingers absently fiddled with the corner of a book.
Oh, and she was also studiously ignoring him.
She was wicked good at that last part. Was making a frickin’ hobby of it, as a matter of fact. Not that he could blame her, considering what she’d offered him.
And what he’d turned down.
Her name was Alexandra Merriweather. Alex for short, which was a ridiculously masculine moniker for such a tiny wisp of a woman. One with skin like porcelain, eyes the color of Colombian emeralds, and a laugh as sweet and tinkling as a music box.
She was his problem because…well…he liked her. Like, liked her liked her. And if his cheating ho of a wife… Scratch that. Rewind… That would be his cheating ho of an ex-wife—had taught him anything, it was that he wasn’t fit to like a woman like Alex.
Not anymore.
All the years schlepping his ass through countless missions, maiming and killing in the name of the flag, had turned him into something…not normal.
That was the phrase Sarah had used when he came home early to surprise her for her birthday, but instead found her screwing his ex-best friend in their marriage bed. Surprise!
“What d’you expect, Mason?” Sarah’s expression had been so sincere. “You’re gone all the time, and when you’re here, you’re not normal.”
Copy that. When it came to a life of violence, the effects were biological, physiological, and psychological. It was the price of being a warrior.
So even though he’d been heartbroken by her betrayal, he’d never worked up much anger over it. Then and now, there was no way to deny the truth. Mason McCarthy was no longer capable of living an ordinary life with the house, the wife, and the two-point-three kids.
The only reason he was sitting in this hotel bar now, a bona fide civilian, was because of a deathbed promise he and the rest of his teammates had made to Rusty Lawrence, the eighth man in their SEAL unit. Barring that, Mason figured he would’ve kept on running and gunning until he found the bullet with his name on it.
With a fingertip, he traced the scrolling black letters inked on the inside of his left forearm. For RL they read. Picturing Rusty’s craggy face, he tried to determine whether to curse the sorry sonofabitch or thank him for forcing them all to make that vow and wave their fond farewells to the navy.
A call of “G’morning, asshole!” cut into his thoughts. Turning, he found Ray “Wolf” Roanhorse standing behind him.
Since he’d yet to determine how good the morning was or wasn’t, Mason grunted his reply. Wolf, used to Mason’s wordless responses, bent to scratch Meat’s exposed belly.
The fat English bulldog slept on his back beside Mason’s barstool, dick and balls on display for the entire breakfast crowd, and his snores nearly drowning out the cries of the seagulls coming in through the hotel’s open windows.
Meat was the only thing Mason had taken from the divorce. He’d let Sarah have their restored three-decker in Southie, along with the furniture and all the minutia that went with a “normal” life. But Meat? Well, not to put too fine a point on it, but he’d have crossed hell with nothing but a bucket of ice water before he’d let her keep his dog.
“A wise woman once said, ‘If you risk nothin’, you risk everythin’.’” With the unaffected ease that came with being supremely fit, Wolf settled himself onto the barstool next to Mason’s.
The two of them had become instant friends when they’d been teamed up as swim partners way back in BUD/S—Basic Underwater Demolition/SEAL—training. And through all the intervening years, Wolf had never run out of inspirational quotes. He fancied himself a scholar of the world’s philosophers and religions.
There were times, including this one, when that could get damned annoying.
Instead of answering, Mason kept quiet. He hoped his silence conveyed his wish for more coffee and less talk.
“I said,” Wolf said louder, “a wise woman once—”
“First off,” Mason muttered irritably, “what part of this face”—he pointed to his scowling mug—“makes you think I’m in the mood for morning convo?”
“You’re never in the mood for conversation,” Wolf drawled, his Oklahoma accent making the words sound twice as long as they normally would. “Don’t matter what time of day it is.”
“Second off,” Mason went on as if Wolf hadn’t spoken, “what’s that supposed to mean anyway? If you risk nothing, you risk everything?”
“It means you should pull your head from your ass and go for it. Take her up on what she’s offerin’.” Wolf stuck a cocktail straw between his teeth and hailed the bartender to put in an order for a Bloody Mary. Hitching his chin toward Alex’s table, he added, “Come on, man. You know you want to.”
Mason hadn’t been kidding when he said he wasn’t in the mood to talk. But he sure as shit wasn’t in the mood to talk about Alex and her heart-stopping offer.
Excerpted from Ride the Tide by Julie Ann Walker.
© 2020 by Julie Ann Walker.
Used with permission of the publisher, Sourcebooks Casablanca, an imprint of Sourcebooks, Inc.
All rights reserved.

About Julie Ann Walker
Julie Ann Walker is the New York Times and USA Today bestselling author of the Black Knights Inc. and the Deep Six romantic suspense series. You can find her on her bicycle along the lake shore in Chicago or blasting away at her keyboard, trying to wrangle her capricious imagination into submission. She lives in Chicago, IL.