Review: In Winters Past by Taylor Danae Colbert (Meade Lake #3) 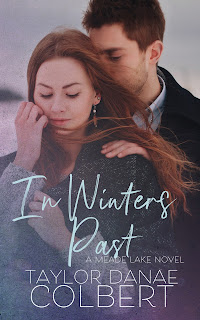 Note: An advanced reader copy (ARC) was provided by the author via Wildfire Marketing Solutions.
Taylor Danae Colbert takes readers back to Meade Lake with the third novel in the series that shares the same name as the small town that a close-knit circle of friend call home and find love. In Winters Past is a friends-to-lovers romance featuring Juliette Grey and Shane Hunter, former best friends who find themselves thrown together time and again when the latter returns to Meade Lake for his older brother's wedding after more than a decade of living in California. For years, it was always Jules, Shane, and their other best friend, Tommy Bills. Then tragedy struck and they lost Tommy...then Jules lost Shane when he left with nary a goodbye nor an explanation. Over the next eleven years, they lead very separate lives--him in California, and her in Maryland--but now he's back for a few weeks. Shane reaches out to Jules, hoping she'll hear him out. He wants a chance to explain, but will agreeing become another chance for him to break her heart once again?
Three books in and the Meade Lake series continues to impress, thanks in large part to Taylor Danae Colbert's great writing. Like the two books before it, In Winters Past can be read as a standalone, but because there are recurring characters, the potential for spoilers regarding previous books is obviously there. That aside, Jules and Shane's story was one that had a fair amount of angst, and my heart went out to them, especially since they had both lost someone they cared about deeply, and you would expect that the person you could lean on most was the other best friend in your life but the he ups and disappears. I understood why Shane decided the best thing to do was to leave, but it did boggle the mind that he didn't really make much of an effort to reach out sooner given that Jules meant as much to him as she supposedly did. Still, I enjoyed this story of love and friendship and moving forward, and my curiosity is piqued as to what awaits Jules's closest friend, Luna Peake, when she finally gets her book. Four stars for In Winters Past.
---------------------------
Read my reviews for the Meade Lake series: