Review: Without You by Jennifer Van Wyk 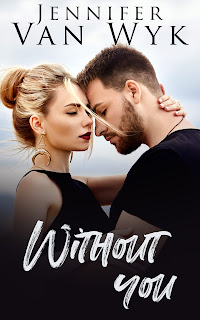 Note: An advanced reader copy (ARC) was provided by the author via Love Affair with Fiction.
In the middle of a two-day widespread power outage after a massive typhoon hit our city--and brought far more damage in other cities and provinces--I found myself having a great deal of time on my hands. Naturally, I turned to reading, and thank goodness I had a couple of power banks on-hand to keep my mobile phone with enough battery during those two days. One of the books that I was able to read was Jennifer Van Wyk's Without You, and it was the lighthearted romance that I seriously needed to get my mind off the typhoon and getting ticked off wondering when the electric company would be fixing whatever needed to be fixed. This is a standalone but does mention past JVW characters.
When Brody Redding crashed his ex-girlfriend's wedding reception, he didn't do it because he wanted her back. What he wanted was to make a point--that it wasn't him missing out on someone like her; rather, it was her missing out on a guy like him who was about to reap the rewards of all his hard work. Sure, he was "just" a mechanic, but he was good at what he did, and he deserved someone who loved and accepted him "just" as he was. Maybe that someone was Katie Landers, a girl he's known since they were both sixteen, but it's only now that she's back in Benton and they're both thirty, that Brody realizes he doesn't really know a whole lot about Katie. But he wants to. A real whole lot.
I really enjoyed this standalone. It combined small-town with friends-to-lovers, although I would consider Brody and Katie more of acquaintances, with the latter having a crush on the former, and the former having taken notice of the latter than either of them may have realized. Inasmuch as I love my angst, I needed something that didn't have a lot of it, and this book had just enough to meet my angst quota while also serving some really nice lighthearted feels. These main characters were fun to get to know, and I've got my fingers crossed we come across a couple of noteworthy supporting ones, namely, Johnny and Chad, and maybe even Chase, in the future. I'm giving Without You four out of five stars.
Date Read: 12 November 2020
Learn more about Jennifer Van Wyk.
Purchase Without You on Amazon.