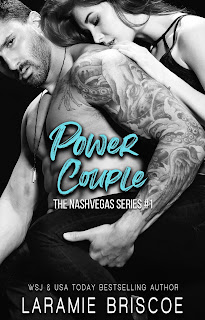 Note: An advanced reader copy (ARC) was provided by the author via Give Me Books Promotions.
My introduction to Laramie Briscoe's writing was back in January of 2017 and came by way of her standalone, Trick, which was followed up by the first in her Moonshine Task Force series a couple of months later. And here's where my confession comes in: I had absolutely NO clue that the MTF series, as well as its spin-off, Laurel Springs Emergency Response Team (LSERT), had ties to this new series from Briscoe as well as her Rockin' Country series, which I have yet to read but has now zoomed to the top portion of my never-ending must-read list. Here's the thing, though: If you're new to this author or, like me, haven't gotten around to reading one or all of the aforementioned tied series, then you have nothing to fret over because the new NashVegas series starter can be read as an absolute standalone. I promise, you won't feel lost at all, but you may find yourself itching to read, at the very least, the story of EJ and RJ Thompson's parents, Garret and Hannah.
Power Couple is the first book in this new series, and it was an interesting story of the lead singer of a popular rock band and a solo pop star princess who go about falling in love in reverse. What do I mean by that? Well, twenty-six-year-old rock star Everett James Thompson of the band Grey Skies and twenty-one-year-old pop singer Brianna Jenkins know of one another, but it isn't until they're in Las Vegas to watch EJ's mom, who just happens to be Bri's absolute favorite singer, perform that the two actually share a conversation. Neither of them thought that it would lead to them not merely sharing a bed but exchanging vows in a Vegas wedding that the world finds out about just as they themselves wake up and realize what happened the night before. With their record label insisting they stay together for publicity, the two agree, but with a private caveat of their own: that they try to make their marriage work and explore their chemistry for real. By the end, will they be writing songs about the power of true love or one about heartbreak?
I quite enjoyed this series starter, what with its Vegas wedding that neither of the main characters can recall quite clearly as the beginning of their relationship. Both EJ and Bri aren't mere stars on the rise--they were bona fide superstars in the music industry and for good reason. I liked how they had a genuine love and respect for their work as musicians and artists as well as having the same dedication and passion in making an honest go of their marriage. There isn't a whole lot of drama here, although there are a couple of angsty moments courtesy of EJ's younger brother and bandmate, RJ, and learning about Bri's less than stellar family history, no thanks to her money-grubbing parents. Speaking of RJ, I'm really hoping he gets his own book in the future because I love a good redemption story. As for the cliffhanger in this book, I only have one word to say: GAH!!! Seven and a half months to wait for the second book, Breach of Contract. Consider me counting the days and adding this to my most anticipated reads for the new year. In the meantime, Power Couple receives a much deserved five stars out of five stars.
Release Date: 29 November 2020
Date Read: 28 November 2020
Learn more about Laramie Briscoe.
Purchase Power Couple on Amazon | Apple Books | B&N | Kobo.