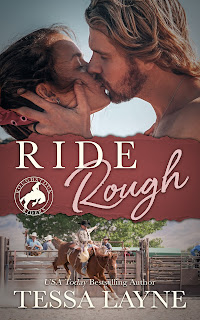 Note: An advanced reader copy (ARC) was provided by the author via Wildfire Marketing Solutions.
Ride Rough is the second book in Tessa Layne's Roughstock Riders series, and it can be read as a standalone, although both main characters do appear as minor characters in the series starter, Ride Hard. When thirty-four-year-old actor Trace McBride gets into trouble one time too many, his agent puts her foot down and leaves him with no other option but to abide by what she believes will salvage his career. So, off Trace goes to Prairie, Kansas, not only to lay low and get as far away as he can from the paparazzi, but also to help him get into character for a possible future film role. There, he's not some movie star who's tabloid fodder--he's Trace Walker, ranch hand and bull rider in training. All he has to do is keep his head down for the next six months--but then he bumps into thirty-year-old journalist Cecelia Sanchez. She makes him believe in starting over...but her chasing the story of a lifetime could end their chance at a possible lifetime--together.
This was a good story, one that had two rather strong personalities who were both itching to leave Prairie, Kansas even before they got settled. I liked the chemistry these Trace and CiCi shared, and it was the sort of chemistry that was obvious from the moment they literally bumped into each other. While the main source of conflict is one that I've come across in other books, I did appreciate Tessa Layne adding her own brand of creativity to make this her own. Trying to figure out what mattered most was at the crux of this story, and Layne's writing once again kept me interested throughout. Four stars for Ride Rough.
-------------------------
Read my reviews for the Roughstock Riders series: