Review: Cover Me by Casey Hagen (So Wrong It's Right #2) 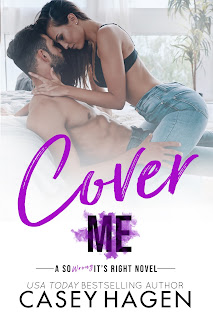 Note: An advanced reader copy (ARC) was provided by the author via Give Me Books Promotions.
Cover Me is the second novel in the So Wrong It's Right series from Casey Hagen, and if you're a fan of falling-for-your-best-friend's-sibling romances AND enemies-to-lovers stories, then this book should right up your alley. Trevor Myers has been doing quite well for himself, and at thirty, he's a shoo-in at becoming partner at Williams and Stensky, the advertising agency where he's the top contracting agent. Just when he thought his boss was going to make the announce about his partnership, he's thrown a curve ball--the new partner would be named after a surprise couples retreat. The problem? Trevor is very much single and has no plans of becoming part of any couple, but if he wants this partnership, then he needs a girlfriend and fast. The name he blurts out to his boss is his best friend's little sister, but twenty-five-year-old Piper Bradley has done a whole lot of growing up since he last saw her. She may have agreed to be his fake girlfriend, but as he gets to know this adult version of Piper, Trevor finds himself hoping for something real.
Okay, confession time: I wasn't a fan of Trevor's for the first handful of chapters in this book. I think it was a combination of me not being all that charmed with the version of him that I'm introduced to and his whole needing to transform Piper from the woman he sees again after years of having no interaction to the girl he once he knew and took to her prom. However, once the layers started to get peeled back, I saw a different version of Trevor, and the same goes for Piper. It wasn't as if they were wholly pretending to be different people than who they truly were, but I think they were kinda-sorta-maybe manufactured personas, the kind that had bits and pieces of their real selves but with elements that they believed made them more palatable in the worlds they found themselves in. All in all, Cover Me turned out to be a four-starred fun, entertaining read.
---------------------------
Read my reviews for the So Wrong It's Right series: