Review: Shock Me by Casey Hagen (So Wrong It's Right #1) 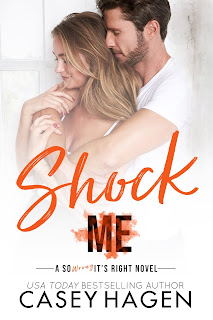 Oh my. Why the heck did it take me so long to read something by this author?! Gah!!! I feel like I've missed out on so much. Sigh. But better late than never, and what an introduction I got, thanks to Shock Me, book one in the So Wrong It's Right series. This is the story of a good girl and a bad boy, but they're not exactly proverbial representations of the typical stereotypes of those two labels. Mabel Lee Montgomery is the daughter of a disgraced preacher who has passed away and a very conservative and protective mother still dealing with the aftermath of the scandal that brought shame to their family. She's not one to go against what her mother expects of her, but when she joins her close-knit circle of girlfriends for a bachelorette party in a strip club, temptation in the form of a stripper named Viper has her considering taking a walk on the wild side. As Mabel Lee gets to know the man, Kellen Savage, behind the persona, will she risk it all for love or belatedly realize that her mother knows best?

This was a really fun-filled read with a bit of angst thrown into the mix. Mabel Lee has a certain amount of innocence and naivete to her, but she's neither clueless nor helpless. I liked seeing her growth as she tried to move past the meek image of rule follower waiting for lightning to strike her down should she do something considered scandalous by holier-than-thou members of her congregation to someone who made her own rules and trusted her heart and mind to lead her down the right path. Then there was Kellen, who was a stripper and business owner and who had a strong sense of duty and accountability as well as loving fiercely those he considered family. There's a bit of a plot twist, but it's not one that will leave you on tenterhooks till the very end. However, I did wonder how it would all play out, and I was quite satisfied with the direction the author chose to take. Now, aside from the main characters, I must point out that the cast of supporting characters caught my attention, especially Mabel Lee's best friends, who all had significant others, which made me wonder if they already had their stories told in a past series and Mabel Lee's was a spin-off because now I find myself eager to know their HEAs. All in all, Shock Me didn't shock me, but it was a happy surprise of a read, and I can't wait for more. This gets 4.5 stars.