Review: Forget Me Not by Felice Stevens 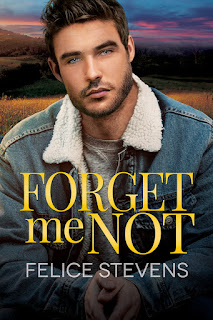 Note: An advanced reader copy (ARC) was provided by the author via Enticing Journey Book Promotions.
When it comes to angst in my M/M romance, Felice Stevens is one of my favorite go-to authors. Her latest standalone, however, is more angst lite, and I'm more than okay with that. After all, the romance and all the swoon-worthy moments Stevens is also known for are ever-present, and with all the stuff going on in the world this 2020, I don't mind authors rolling back on the heavier themes and feels that I'm usually addicted to. What Stevens has given readers in her latest novel is a feel-good romance that is about rediscovering one's legacy and reinforcing that not all families have to be structured similiarly. Oh, and love and loads of it--for one's significant other, family, and loved ones.
Forget Me Not introduces readers to Shea Montgomery and Jake Axelrod, two men who head a mostly endearing cast of characters in a romance set in the beautiful backdrop of the Forget Me Not Ranch found in Remembrance, Texas and amidst the hustle and bustle of New York City. Shea's plan has always been to sell the family ranch and move to New York City to pursue his modeling career full-time, but it's been on hold ever since his beloved father got sick and passed away. When New York executives arrive for a company retreat show up, he never expects to be drawn to Jake. A divorced father in his mid-thirties, Jake has done well for himself in the decade he's been at Precision Financial, but what he wants more than anything is for his six-year-old daughter, Stacey, to speak once again, something she hasn't done in the past two years. Neither man was looking for love, but will love be enough to overcome all the challenges that face them as a couple?
This book... Le sigh. Dare I say that this is one of my favorite reads for November? It was such a pleasure getting to know both Shea and Jake, and cheering them on towards their happily-ever-after was no hardship. But then there were the supporting characters as well--from little Stacey and her nanny, Terry, in New York to Aunt Patty and Craig and Johnny in Texas, and there's no way I could forget Kiss and Rambo, Stacey's Labrador retriever and Shea's horse, respectively. Then there are Jake's and Shea's circles of friends, too. Just a great handful of notable characters that added depth and interest to an already engrossing and endearing story. I admire how Felice Stevens's backdrops never fail to feel as if they're characters in her books, and the same goes for this latest novel. While I pretty much figured out why Stacey had stopped speaking, it didn't take the least bit away from seeing everything unfold, making for a wholly enjoyable read from the very first page till that last one. Forget Me Not was simply an unforgettable five-star read.
Release Date: 24 November 2020
Date Read: 24 November 2020
Learn more about Felice Stevens.
Purchase Forget Me Not on Amazon.