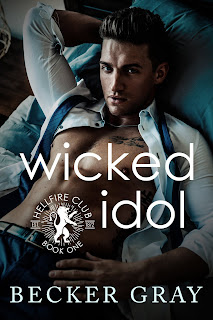 Note: An advanced reader copy (ARC) was provided by the author via Give Me Books Promotions.
Wicked Idol is the first book in the Hellfire Club series from Becker Gray, which is a pseudonym for two romance authors who have joined forces. I haven't figured out who they are, but one clue is that Skye Warren is friends with them, as stated in her most recent newsletter. Wink, wink. The identities of these two authors doesn't matter, though, for as long as the writing is as good as what they gave readers in this new adult (NA) romance series starter. It's intriguing and enticing, reminding me of a number of popular television series set in high schools with students who come from uber wealthy families.
Eighteen-year-old Iris Briggs is the new girl in Pembroke Preparatory Academy, and the last thing she wants is attention. Unfortunately, literally bumping into the boys who make up the infamous Hellfire Club and dousing fellow senior and captain of the rugby team Keaton Constantine with coffee now has her on their radar. Being the daughter of the new headmaster isn't earning her bonus points either. She's earned the ire of Keaton, who at eighteen as well, seems to exude the power and prestige that comes with being a Constantine. He makes her feel a myriad of things, but there's no way she can act on the most wicked of them, no matter how tempting he may be. They don't fit together. Right?
Ah, I love it when both main characters in a book evolve throughout the story because they were inspired by each other. Iris and Keaton may have seemed like they were from different worlds, but they had FAR more in common than either of them realized. There pressure they got from their respective parents weighs heavily on both of them, and I liked how they were able to see beyond what they showed the rest of the world. This series has an interesting cast of characters, and while Iris and Keaton get their happily-ever-after here, I'm itching to see what awaits the rest of their groups of friends who I believe are far more entangled than you would assume. The sneak peek into book two has me excited for more from Hellfire Club and Becker Gray. Wicked Idol snags 4.5 stars.
Release Date: 17 November 2020
Date Read: 17 November 2020
Learn more about Becker Gray.
Purchase Wicked Idol on Amazon | Apple Books | B&N | Kobo.