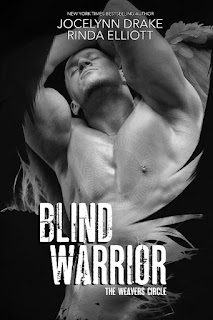 Note: An advanced reader copy (ARC) was provided by the authors via IndiGo Marketing & Design.
Saying I'm obsessed with this series would be an understatement. Jocelynn Drake and Rinda Elliott have a penchant for writing series that readers become all emotionally invested in, and the same goes for their Weavers Circle books, which have a more paranormal romance feel to them with a touch of the supernatural. The series is about a group of six brothers who may not be tied together by blood, but fate has once again sought to bring the six Weavers--Earth, Animal, Soul, Fire, Water, and Air--together. One by one, they are "found" and brought to live on a sprawling estate in Georgia, and this time around, they have destined mates. Together they must rid the world of pestilents--the same evil, formidable enemy that generations of Weavers before them failed to do.
Blind Warrior is the third release, and it features the story of Grey Ackles, a twenty-eight-year-old author who just happens to also be the Soul Weaver. It's Grey who was able to tap into the thoughts and emotions of those around him, knowing when one's soul mate had been found...but that was until the Weavers' last clash with pestilents left him blind. Now, he's working with thirty-three-year-old Cort Newton, a vision rehabilitation therapist, who can help Grey re-acclimate to the world around him as a vision-impaired individual. With each day that passes, Cort helps Grey adjust to his new normal, but will it also mean that hope for Grey's vision to return diminishes? Even as their feelings for each other grew, will Cort still be blinded by love when he learns the truth about Grey?
One of my favorite things about this series is that the Weavers continue to hone their powers, both as individuals and as a circle. It becomes part of their bond, one that grows stronger with each new book released. Here in book three, I loved seeing a different side to Grey, who is usually more stoic, helping to keep his brothers calm and centered. Seeing him struggle with his loss of sight was interesting because now he was forced to accept the help that was being offered to him, and not just by Cort. Speaking of Cort, the guy was that perfect counterbalance to Grey, and I enjoyed being a witness to the development of their relationship and his protective nature over Grey. The new Weaver is certainly interesting, and I'm loving the continuing diversity. I am giving Blind Warrior five stars.
-------------------------

Read my reviews for the Weavers Circle series: