Book Spotlight: Once Upon a Mail Order Bride by Linda Broday 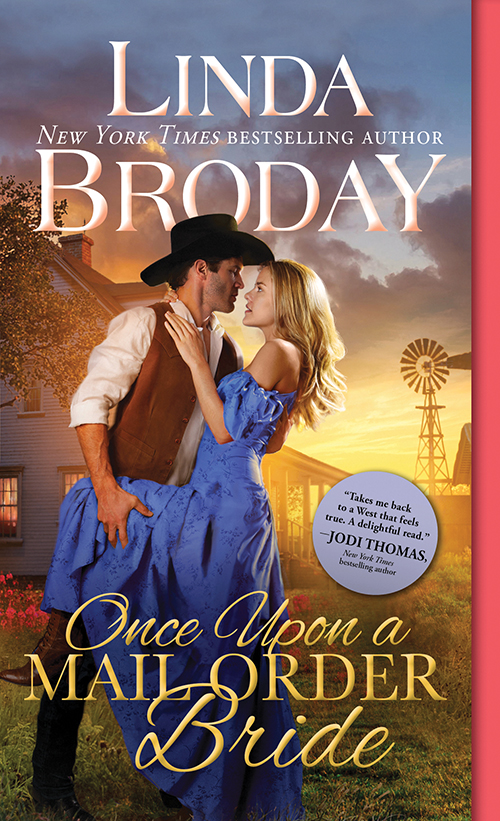 About Once Upon a Mail Order Bride
An outlaw falls for his mysterious mail order bride in this sweeping western epic by beloved author Linda Broday.

Accused of crimes he didn’t commit, ex-preacher Ridge Steele is forced to give up everything he knew and make his home with outlaws. Desperate for someone to confide in, he strikes up correspondence with mail-order bride Adeline Jancy, finding in her the open heart he’s been searching for. Upon her arrival, Ridge discovers Addie only communicates through the written word, but he knows a little of what trauma can do to a person and vows to stand by her side.
Addie is eager to start a new life with the kind ex-preacher and the little boy she’s stolen away from her father—a zealot priest of a terrorized flock. As her small family settles into life at Hope’s Crossing, she even begins to find the voice, and confidence, she’d lost so long ago.
But danger is not far behind, and her father will not be denied. While Addie desperately fights the man who destroyed her childhood, a determined Ridge races to the rescue. The star-crossed lovers will need more than prayers to survive this final challenge…and find their way back to each other again.

Add Once Upon a Mail Order Bride on Goodreads.

An Excerpt from Once Upon a Mail Order Bride
Ridge glanced at the woman sitting next to Josie with a black lace scarf covering her head and obscuring most of her face. She seemed to huddle deeper into the folds, as though wishing to escape his notice.
He started around the wagon to help his bride down and introduce himself when Luke Legend steered him away from the others.
Luke kept his voice low. “There’s something you need to know before you meet Adeline.”
His chest tightened. Was she disfigured? Was that the reason for the veil? “What’s that?”
“She can’t speak.”
Shock jolted Ridge. “What do you mean she can’t talk? Can’t for a medical reason? Did someone cut out her tongue?”
He’d heard how bad prison was and had once met a convict who shook and jerked all the time. Someone had used him as a test subject for a new device, rigged up with paper soaked in saltwater and something to do with zinc and copper.
A search of his memory brought no recollection of Adeline mentioning this in the few letters they’d exchanged.
“Nothing like that,” Luke assured him. “It’s more like she won’t try. The doctor at the prison said they kept her in isolation for the whole three years as part of her punishment. With no one to talk to, she seems to have forgotten how. Anyway, she’s going to require a lot of understanding.” Luke shifted and the silver conches running up the sides of his black pant legs flashed in the sunlight. “There’s more.”
Good Lord, what else? What did that prison do to her?
“Someone’s hunting her.”
A wave of fury crashed over Ridge. His voice held a sharp edge. “Who? And for what reason?”
“Don’t know, but Adeline does. I was waiting for her at the prison and overheard two men talking about her. One said the best time to grab her was when she came out, and that the money for the job would keep them well off.” Luke grinned. “I took her out the back way.”
“Dammit!” Ridge studied the faint bruises on his friend’s jaw that said he’d had to fight to keep Adeline safe. Anger rose. Ridge clenched his fist. Whoever wanted to harm her would now have to deal with him.
“When they realized what we’d done, they chased us. I was barely able to get her onto a train to Fort Worth.” Luke paused. “Wish I knew more.”
“Makes two of us.”
“The question is…do you still want to marry a hunted woman? One who might never speak?”
Here was an excuse if he wanted to take it. It was unlikely that anyone would fault him for it. Only one thing wrong with that—he wasn’t happy the way he was. He needed more from life than merely existing from one day to the next. And what about Adeline? His rejection might finish the process of destroying her. Plus, she needed protection—and that was something he at least knew how to give.
“Yes, I’ll marry her—if she’ll have me.”
Luke slapped his back. “Then I’ll introduce you and we’ll plan a wedding.”
Ridge took some nervous breaths and matched Luke’s stride as they moved toward the wagon. Luke helped her down. She didn’t lift her head. Ridge, well over six feet, towered above the slim, petite woman.
Adeline wore a simple dress of blue calico that hugged in all the right places. Ridge grew warm thinking about running his hands over those curves. The strands of blond hair poking from the heavy black scarf were golden in color, deep and rich.
Luke put an arm around her. “Miss Jancy, meet your bridegroom, Ridge Steele. I personally vouch for his character. I’ve fought by his side and know he’s a good man to have around. He’ll fight for you until you’re strong enough to do it yourself.”
She stood rooted in silence. Ridge wished he could see her face.
“That’s a promise, Miss Adeline.” Ridge cursed his suddenly raspy voice. She struck him as a wounded, exhausted little wren, battered by heavy storms. “Thank you for coming. I’m only an outlaw, a wanted man with little to my name. But everything I have is yours—if you want it.”
She lifted her head and removed the black scarf. Kissed by the sunshine, her hair curled around her shoulders and flowed down her back. Emerald eyes stared up at him, framed by thick dark lashes and a jolt raced through him.
Here stood the brave, determined woman he’d seen under a Fort Worth night.
Ridge sucked in a breath. He’d been right in thinking she’d be pretty in the daylight. By God, she was beautiful. Although the others stood there, they’d somehow melted away. Adeline was the only person he could see. Shoulders squared, her determined gaze bored into him and her chin raised a notch. Despite everything, she had fight left in her. He’d probably find out how much if he didn’t watch it.
Did she recognize him as well? Her expression didn’t indicate if she did. But then it’d been dark that night, and his Stetson had shielded most of his face.
He brought her hand to his lips and cleared his throat. “Miss Adeline, I’d be honored if you’d be my wife. Will you accept my proposal?”
One jerk of her head confirmed her answer.
“Is tomorrow too soon? Or would you rather wait a few days?”
Panic crossed her face. Taking the paper and pencil Luke handed her, Adeline wrote, “Tomorrow.”