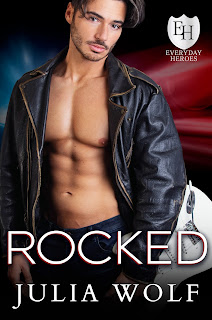 Note: An advanced reader copy (ARC) was provided by the publisher via Grey's Promotions.

"I told you not to fall in love with me."

My chest squeezed tight. Those weren't the words I wanted to hear. "Guess I don't like doing what I'm told."


Confession time: I was prepared to not like Devon Chambers. At all. Sorry, but he earned my ire in Misconception, the second book in Julia Wolf's Unrequited series. I wasn't the only one who loved to hate the guy, and he deserved the backlash. However, I'm a fan of stories of redemption, and boy, oh boy, did Devon redeem himself in Rocked, which is Wolf's offering in bestselling author K. Bromberg's Everyday Heroes World collection--which is, in turn, part of the main KB Worlds project--that features a multitude of various authors whose submitted stories are inspired by Bromberg's Everyday Heroes series, which is also one of my personal favorites. Now, all this being said, you don't need to read any of the books in the Everyday Heroes series OR the Unrequited series in order to fully enjoy the new book.

Rocked is, at its most basic, the story of a thirty-five-year-old rock star who's divorced and lost his shine and a thirty-two-year-old paramedic who's got a twelve-year-old daughter she co-parents with her ex who just happens to be one of her closest friends. When Devon Chambers finds himself sidetracked in a small town called Sunnyville while on his way to Los Angeles, he decides to stay a while, hoping for inspiration to strike so he can get his career back on course. Unfortunately, his new neighbor isn't all that welcoming. Kathleen Murphy doesn't seem to have much tolerance for a fading rock star, but her pre-teen daughter, Eleanor Domingo, aka Ellie, and her dog, Bad, Bad Leroy Brown, aka Leroy, seem to have taken a shine to him. Being around Kat tempts Devon to stay in Sunnyville--but does she want him to?

Yep, Julia Wolf did the near impossible--she made me...dare I say it?!...love Devon Chambers. Oh, and she took her time, making sure it was clear that the guy wasn't perfect, but that there was more there than the jerk we came to hate in Misconception. Talk about character development, people! You know what they say about it taking a village to raise a child? Well, it took a small town community in general and his neighbors in particular to make a hellraiser not so...hellishly hate-worthy. I absolutely loved Kat, who has to be, hands down, one of my favorite female main characters so far this year. And let's not forget Ellie and the rest of the supporting cast, as well as Leroy the scene-stealer. I adore standout characters who help make a wonderful story even better. Wolf totally rocked Rocked. Five-plus stars.