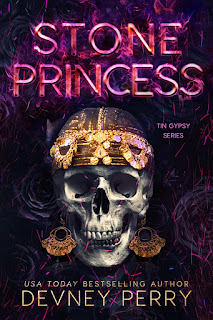 What exactly had I been thinking? I was supposed to be protecting my wounded heart, not tossing it to a man destines to smash it to smithereens with his very capable hands. What the hell was he even doing with me?

He was the Shaw Valence.


The easiest thing would have been to pair Presley Marks with one of the other guys in the garage that's become their second home, but Devney Perry doesn't do what many may expect, and thank goodness for that because readers like me get to reap the rewards of her creative genius. Stone Princess is the third novel in her Tin Gypsy series, and we've now got the story of the lone female in the Clifton Forge Garage. It's been nearly a decade since Presley Marks left her nightmarish circumstances in Chicago, Illinois to make her way to the small Montana town of Clifton Forge. She arrived at eighteen knowing she had a job, but also found a family with the guys she worked with--from the man who she looked up to as a father, Draven Slater, to his younger son, Dash, and the rest of the crew. When her fiancé jilts her at the altar, Presley swears to never allow another man to put her in that position again, so acknowledging her attraction to a famous actor who's in town to produce and act in a film depicting the events that changed everyone in the garage would be crazy. But the more she says "no", the more Shaw Valance wants to do anything necessary to chip through the stone wall surrounding the beguiling woman he cannot resist.

First things first: I'm going to highly recommend that you read the Tin Gypsy series in order, particularly because there's a continuing story arc that plays out in books one and two--Gypsy King and Riven Knight, respectively--and that story arc is what is being made into a movie in book three. There are also bits and pieces of Presley Marks's relationship with her ex in the earlier novels that provide a clearer picture of why everyone around her saw what a mistake it was for her to marry the guy. It doesn't hurt that all these books are as well-written as they are, so you honestly have nothing to lose by diving in and hopefully falling for this cast of characters as much as I did. If you've never read anything by Devney Perry, this series is an excellent starting point. I promise, you won't regret doing so!

Ah, Presley is a heroine after my own heart! She reminded of a Mentos candy--a bit of a hard shell but a softy on the inside. She had love and loyalty towards those she considered family, and she had good reason to be as wary of other people as she did. I loved getting to know Presley because she certainly had a story to tell, and it was a heartrending one. I was curious to see how being with someone like Shaw would affect her, but then she affected him just as much, making it clear that falling for each other was going to bring certain changes to both of them. There's also a hint of mystery here, although not as prevalent as in the first two books, and there's a particular story line that will carry over to the fourth book, Noble Prince (Can it please be November already?!), although Presley and Shaw's story does get the happily-ever-after that it deserves, so no frustrating cliffhangers to worry about here. Stone Princess was a fantastic read about love, trust, family, and resilience, and it snags five-plus stars. ♥