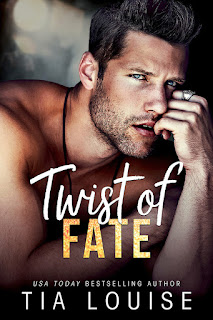 Note: An advanced reader copy (ARC) was provided by the author via Give Me Books Promotions.
I've been itching to get my hands on this book ever since I finished This Much Is True last year, and Tia Louise made the wait for Twist of Fate worth it. This is the second book in the Taking Chances series, and yes, you may read it as a standalone--but go read its predecessor as well because of the whole recurring characters thing and the fact that it was such a great read! For those like me who've already read the first novel, this second one has a much more lighthearted feel to it, although there is a pinch of angst thrown in.
Scout Dunne and Daisy Sales have known each other since they were kids. They've been friends for years, and though the possibility of being more may have been within reach once upon a time, friends were all they were when they went their separate ways to attend college. When the two of them spend a brief period of time together, they end up finally crossing that line that's been hovering between them. However, Scout leaves their hometown--and Daisy--in order to pursue his dreams of becoming not a professional football player as was expected of him, but of an actor instead. Time passes and both their lives have changed, but when Scout sees Daisy again, he has no idea just how much.
I adored reading Scout and Daisy's story! This really was a friends-to-lovers romance, but then the whole second-chance trope comes in because they did lead separate lives for four years. Their story is a reminder that life doesn't always go as planned; it certainly didn't for either of them. But they made the necessary, albeit sometimes uncomfortable, adjustments and made do. I loved the easygoing feel that their relationship had, highlighting that they already had a great foundation for it, thanks to their lifelong friendship. There was so much to love about Twist of Fate, which is why it gets five stars.
-------------------------
Read my reviews for the Taking Chances series: