Review: This Much Is True by Tia Louise (Taking Chances #1) 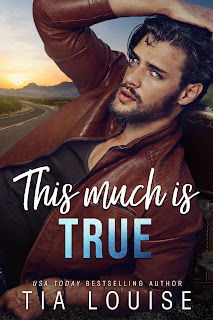 Note: An advanced reader copy (ARC) was provided by the author via Give Me Books Promotions.
A grumpy ex-con, a hopeful pancake goddess, and an accidental porn star got in a 1967 Chevy Impala nicknamed "Metallica" for a road trip (not a romance) from California to South Carolina, specifically, a small town called Fireside. Sounds intriguing, doesn't it? Tia Louise starts off her new Taking Chances series with This Much Is True, and introduces readers to the aforementioned trio. It needs to be said that this isn't a story involving a threesome, at least not in the romantic (or sexual) sense. Who we have here are twenty-six-year-old John Roth Dunne (aka J.R., the grumpy ex-con), twenty-three-year-old Hope Eternal Hill (aka Hope, the hopeful pancake goddess), and twenty-five-year-old Bradley Scout Dunne (aka Scout, the accidental porn star). The romantic couple here are J.R. and Hope, and Scout is JR's supportive younger brother and also becomes Hope's close friend.
This book was one that I went into blind, and I'm glad that I did because it allowed me to simply go with the flow. I strapped myself in and enjoyed the ride that Tia Louise took me on, and seeing how a road trip seeking revenge became a romance finding redemption and renewal. JR was the dark to Hope's light, and boy, did he need her. What began as a sliver of possibility to a slew of probabilities once this twosome opened themselves up to it. I appreciated that while the connection between the two of them was made clear early on, it took a bit for them to actually get to the point where they acted on it. I also loved seeing their relationships with the people who meant most to them--JR with his brother, Scout, his son, Jesse, and his grandmother, aka GA, and Hope with her father and her best friend, Yarnell. This Much Is True was a moving tale of love, family, and hope. Five stars.
Release Date: 14 December 2020
Date Read: 13 December 2020
Learn more about Tia Louise.
Purchase This Much Is True on Amazon.